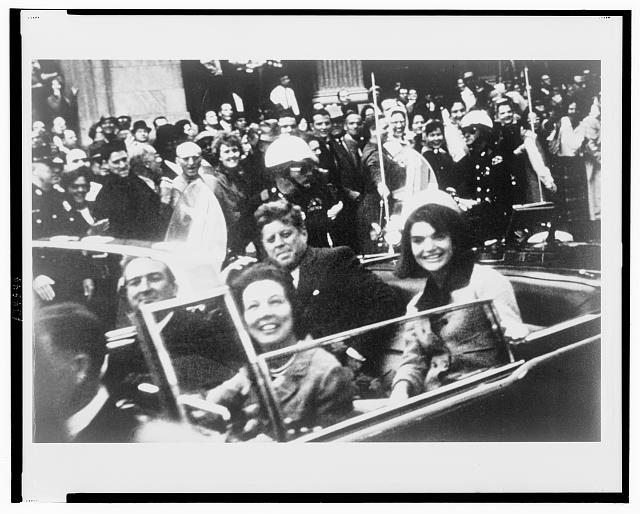 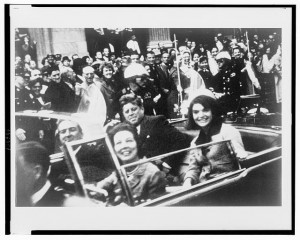 President John F. Kennedy and wife, Jacqueline, ride in a motorcade in Dallas just before his assassination.

President John F. Kennedy is drawing a lot of attention. Next year marks the 50thanniversary of his assassination, and a controversial mini-series on his family, “The Kennedy’s,” has been airing on TV.

Kennedy was the 35th president of the United States, serving from 1961 until his death in 1963. He was a Catholic, winner of the Pulitzer Prize and the youngest president elected to office, at the age of 43. He was married to Jacqueline “Jackie” Kennedy, and they had two children together. But Kennedy had alleged secrets; all of his secrets had long hair and even longer legs.

One of Kennedy’s alleged mistress is Mimi Alford. She was a former White House intern during the Kennedy Administration. Alford recently wrote a book detailing her 18-month affair with Kennedy when she was only 19 years old. The book, “Once Upon a Secret,” details the story that she has kept under wraps for almost 50 years.

In Alford’s accounts of the affair,  she said she ended up in bed with the president on her fourth day at work. She states that she was invited to swim at the White House pool during lunch time and the president asked her “Mind if I join you?” She couldn’t decline. That same afternoon what she thought was a “welcome to the staff”  get together turned out to be a private tour with just her and the president which ended in the sheets of Kennedy’s bedroom. The affair then lasted 18 months; she even traveled with the president, being put on the plane with the luggage. She isn’t ashamed of any of it, as she states in her book.

“I was merely occupying the president’s time when his wife was away.” The book also tells about the aftermath the affair and trying to keep a secret had on her, she states “It’s possible that in holding back the full truth of who I was, I was also holding back myself, which shut me off from experiencing the thrill of falling in love. That’s just one of the many ways my secret has cost me. I wouldn’t wish it on anyone.”

Gunilla Von Post, one of Kennedy’s mistresses known as a Swedish aristocrat, also wrote a book detailing her alleged affair titled “Love, Jack.” The book was published in 1997 and last spring she auctioned off his love letters to her, in one letter Kennedy wrote “I might get a boat and sail around the Mediterranean for two weeks — with you as crew.” In her book she actually states she felt a sisterhood with Kennedy’s wife Jacqueline, she reflects her thoughts when deciding on whether to tell her story about Kennedy, “Could I ever tell anybody my story? I certainly never would have while Jacqueline was alive. But would her children understand? Would mine? What would people think of me? Did I want to let the world know about a moment in time that was precious, private and magical?”

The eeriest of Kennedy’s secrets are his mistresses Mary Meyer and Marilyn Monroe. Both Meyer and Monroe’s death remains an unsolved mystery. Meyer and her husband, CIA agent Cord Meyer, were young socialite of Washington, D.C. After Kennedy was elected as president, Meyer became a frequent visitor to the White House, and according to author Peter Janney, her sexual relationship with the president was well known at the time. On Oct. 12, 1964, nearly 11 months after John F. Kennedy’s assassination Mary Meyer was murdered along the Chesapeake and Ohio Canal towpath in Georgetown. She was shot two times at close range. No gun was ever found and no one was ever convicted. The murder remains a mystery to this day. Many conspiracy theories have emerged. Janney believes that Kennedy’s assassination was the result of a CIA plot to eliminate the only man in the way of the agency’s total control over U.S. foreign policy. The CIA viewed Meyer as a similar threat because she was too close to the truth.

Author Nina Burleigh further explains the theory in an article for The Daily Beast, she states, “When I was writing my book in D.C. in 1996 and 1997, I became aware of a cult of believers who were certain, absent any proof, that Mary had turned JFK on to LSD, and that she was behind the moves toward rapprochement with Russia and Cuba that he seemed to have been making in the months before he was killed. Mary Meyer had to die, the theory went, because she knew why “Jack” was killed, and maybe even—since CIA men were her friends and lovers—who was behind it.” Burleigh wrote a novel about Mary Meyer titled “A Very Private Woman; The Life and Unsolved Murder of Presidential Mistress Mary Meyer” Burleigh doesn’t believe in the CIA theory, she believes Meyer was probably murdered by Ray Crump,  the man police arrested within hours of the crime in the surrounding area of the murder. He was found not guilty because the evidence against him was circumstantial since no gun was ever found. Crump had a violent past, and continued to commit violence after being found not guilty with the rape of a 13 year old girl and repeat arsons.

Marilyn Monroe is allegedly one of Kennedy’s mistresses.

There are also multiple theories on the death of his mistress Marilyn Monroe. The affair between Monroe and Kennedy allegedly began after she sang Happy Birthday to him at Madison Square Garden on May 19, 1962. That same year, ne year before Kennedy was assassinated, Monroe was found dead in her hotel room of what is claimed to be a drug overdose. But Dr. Thomas A. Noguchi, as well as many other doctors, would say otherwise. Monroe supposedly had committed suicide by ingesting mass quantities of pills but according to Noguchi’s studies her stomach was found empty. It was also claimed that she had taken a Nembutals tranquilizer, but if she did yellow dye should have been found on the linings of her throat, esophagus and stomach.  There was no yellow stain present. One theory suggests that she was killed to prevent her from telling secrets about Kennedy. But to this death Monroe’s death also remains a mystery.

Judith Exner, another mistress of John F. Kennedy, published her own account of Kennedy’s story in “Judith Exner: My Story (1977).” She describes her knowledge of several of Kennedy’s affairs.  One being with a Danish woman who was believed to be a German spy during World War II, and she also describes her knowledge of his short affair with Marilyn Monroe. She also recalls how Kennedy would bring prostitutes to the White House swimming pool. In 1960 Exner was dating Frank Sinatra; it was him who introduced her to Kennedy. Exner claims she became involved with Mafia Leader, Sam Giancana and Kennedy at the same time. During the presidential election in 1960 Exner would take messages from Giancana to Kennedy concerning the plans to murder Fidel Castro. Kennedy was in on the planned murder. Exner died on Sept. 24, 1999 of breast cancer.

Many journalists and historians have documented Kennedy’s numerous affairs most of them discovered after his assassination on Nov. 22, 1963.