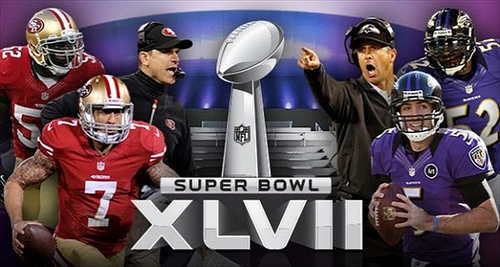 It was the perfect ending for Baltimore linebacker Ray Lewis on Sunday as his Ravens withstood a furious second half comeback by the San Francisco 49ers to send him out with a championship victory in Super Bowl XLVII.

In a game that featured everything from Beyonce to a power outage, the Ravens just edged out the 49ers 34-31 after nearly blowing a 22-point lead.

A Baltimore team that some didn’t even expect to make the playoffs, much less the Super Bowl, struck first with a 13-yard touchdown pass from quarterback Joe Flacco to receiver Anquan Boldin.

Following another touchdown strike, this time to tight end Dennis Pitta, Flacco went deep as the half wound down and found receiver Jacoby Jones over the top for a momentum-grabbing 56-yard touchdown. San Francisco would head into the locker room trailing 21-6 at halftime.

Jones would spark the excitement of a crowd already electrified from a Destiny’s Child reunion performance, going 108 yards to the house on the opening kickoff of the second half. Jones, who went the length of the field almost untouched, seemingly put the exclamation mark on a Super Bowl blowout until the lights went out.

A 34-minute blackout at the Superdome in New Orleans cut more than the lighting as an entirely different 49ers team took the field when play resumed.

The 49ers easily drove down the field, ending in a 31-yard touchdown pass from quarterback Colin Kaepernick to receiver Michael Crabtree. That started a 23-3 run for San Francisco, leaving the game much tighter than anyone could have imagined just a quarter ago.

San Francisco kept the Ravens out of the end zone on their next drive but couldn’t prevent a Justin Tucker field goal, which extended Baltimore’s lead to five.

For the past decade, Lewis has been the undisputed leader of a defense known for its physicality. Sunday night, that same defense made a stand four times in the red zone, all but securing a storybook ending for their fearless leader.

Joe Flacco would take home Super Bowl MVP honors although Jones or Boldin could have been legitimate selections in their own right. A much younger, new-look Ravens will try to defend their title next year as this was Lewis’ final game.