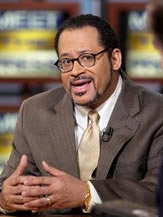 Dyson, a sociology professor at Georgetown University, highlighted Holder’s lawsuit against the state of North Carolina over its voter-identification law in his sermon on the biblical book of Lamentations.

After paying deep respect to Holder and his wife, Dr. Sharon Malone, Dyson dove into his social justice-charged sermon by invoking the blues and quoting Ralph Ellison.

“The blues is an impulse to keep the painful details and episodes of a brutal experience alive in one’s aching consciousness, to finger  its jagged grain, and to transcend it, not by the consolation of philosophy but by squeezing from it a near-tragic, near-comic lyricism,” Ellison wrote in his essay “Richard Wright’s Blues” for the Antioch Review in the summer of 1945.

“As a form, the blues is an autobiographical chronicle of personal catastrophe expressed lyrically,” Dyson said. “If the book of Lamentations had been ripped from the transcript of black existence, it wouldn’t be called just Lamentations; it would be called ‘The Blues.’”  He explained the book to be a “blues meditation on tragic circumstances of political exploitation.”

“Black people have been assigned inferiority over a lot of things, but music hasn’t been one of them,” Dyson told the crowd in Cramton Auditorium.

Paying homage to the struggles of African Americans in past positions of oppression, while zeroing in on the “blues” of youth today, Dyson’s 45-minute sermon elicited whistles and stomps from the crowd of brown faces. But the validation of the crowd slowed down as Dyson criticized the “No Dragging and Sagging” law in Chicago that proposes a ban on sagging pants. Nevertheless, Dyson continued.

“Some of us are profiling our own children,” he said, making a comparison to the shooter in Trayvon Martin’s death in Florida. “Some of us are mini George Zimmermans who are lying in wait to accost them with stereotype(s) and vicious assault.”

Dyson posed this question to the interactive crowd: “Are we going to actually have black legislators across America spending money to tell kids to outlaw their sartorial choice of sagging?

“Maybe if you lift their vision, and their dreams, and their aspirations, their ‘draws’ will follow,” Dyson preached to an applauding audience.

In a manner reminiscent of King’s “I Have a Dream” speech,” delivered 50 years ago this year, Dyson ended his sermon with the same growled, elevated tone and repetition of verse that the civil rights leader used on Aug. 28, 1963.

In as fluid a motion as the steady rhythm of his speech, Dyson looked from center stage to the relaxed face of the gray-haired attorney general to give Holder a final gaze of appreciation.

As the sociology professor left the stage, the crowd, including his wife, the Rev. Marcia L. Dyson; BET CEO Debra Lee, and the Holders, burst into the type of passionate applause that fills Cramton Auditorium on a Sunday morning.