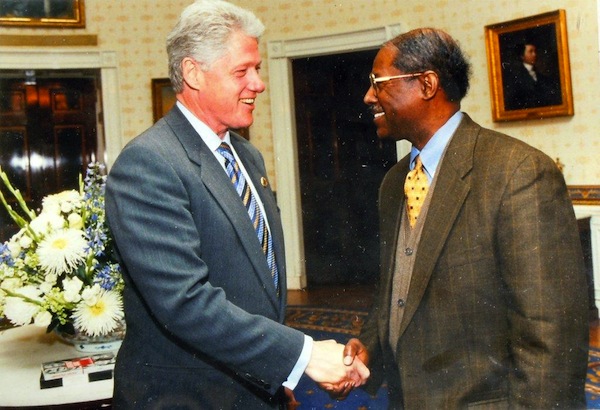 During a session on “Black Presidential Politics in America,” McCormick said that citizens should check politicians’ resumes to determine whether they possess the qualities and traits to enforce the change necessary to impact those in need.

Another panelist, Lorenzo Morris, Ph.D., a political science professor and chairman of Howard’s Faculty Senate, said African Americans need to stick together to get issues passed in the government. “There is no such thing as an independent decision maker,” Morris said.

McCormick and Morris were among several educators and professionals from across the nation invited to discuss their perspectives on where they see America heading and how Walters has impacted it.

Walters, known worldwide for his political expertise, died of lung cancer at the age of 72 on Sept. 10, 2010. His legacy and name live on through the work of those committed to carrying the torch.

Walters was a professor at Howard for 25 years and later at the University of Maryland. In addition to being known as a distinguished scholar and leading authority on global politics, he was influential in the creation of the Congressional Black Caucus (CBC). Walters was also campaign manager and close adviser to the Rev. Jesse Jackson when he ran for president in 1984 and 1988.

To commemorate Walters’ legacy, Howard University created the Ronald W. Walters Leadership and Public Policy Center, which co-sponsored the conference on Oct. 10 and 11 with organizations such as the CBC, Joint Center for Political and Economic Studies and National Conference of Black Political Scientists.

Members of the public came to the Armour J. Blackburn Center to hear the thoughts and opinions of scholars closely impacted by Walters’ legacy. Behind them sat college students who were just as curious. Conference speakers ranged from former U.S. Rep. Ronald Dellums, the first visiting fellow of the Walters Center, to Michael Eric Dyson, Ph.D., professor of sociology at Georgetown University, author and MSNBC commentator.

“We are all impressed by Walters as a role model for his achievements,” Morris said during the panel on presidential politics.

Michael Fauntroy, Ph.D., associate professor of political science at Howard, had a similar reaction. “I’m thankful for the trail he blazed for people like me,” he said.

“Walters was committed to coming up with ways to navigate through politics for the advancement of blacks,” Fauntroy added as overwhelming applause of gratitude and agreement erupted from some audience members.

Watch the late Ronald W. Walters discuss the connection between the Civil Rights Movement and the election of President Barack Obama on C-Span.