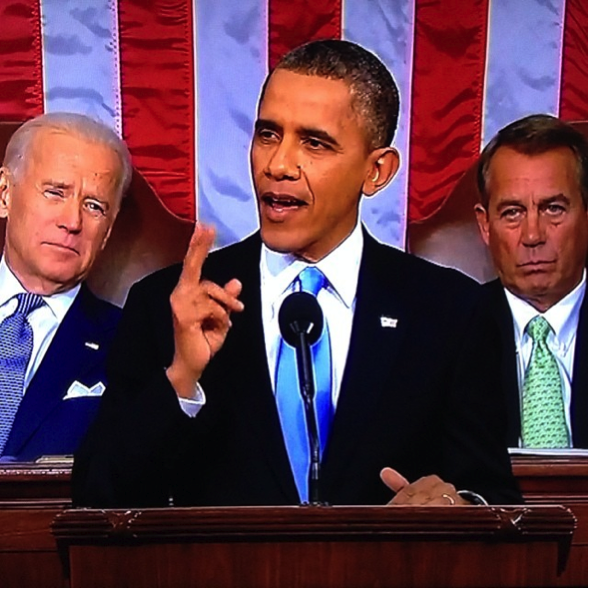 President Barack Obama encouraged Americans to reform and take action as a nation in his State of the Union address on Tuesday night.

“Let’s make this a year of action,” Obama said. “That’s what most Americans want – for all of us in this chamber to focus on their lives, their hopes, their aspirations.”

In his speech, President Obama boldly declared that in the near future he would issue an executive order to raise the federal minimum wage from $7.25 to $10.10 an hour. He also pleaded with business owners to recognize the economic importance of giving Americans a pay increase.

“Nobody serving the U.S. Army food or cleaning after them should have to live in poverty,” Obama said.

Colin Hicks, who is working on the political campaign of Maryland Lt. Gov. Anthony Brown, supports Obama’s efforts to raise the minimum wage. “I think that’s a big step for the federal government to do that,” Hicks said. “Congress has to act so millions of other Americans can also have that same minimum wage.”

Enacting policies without Congress’ approval, in certain instances, is an example of how the president plans to take action this year. “Wherever and whenever I can take steps without legislation to expand opportunity for more American families, that’s what I’m going to do,” Obama told a joint session of Congress and a national television audience.

For some viewers, one of the most profound moments occurred when the president discussed the ongoing inequality that women face in the workforce. Obama expressed that the corporate world still needs to make major changes by saying, “It’s time to do away with workplace policies that belong in a ‘Mad Men’ episode.”

“His strongest point was on women and inequality,” said Isaac Abraham, a political science major at Howard University. “He capitalized on the point that women are making three-fourths of what men make and that it is time for a change.”

President Obama also mentioned the importance of striving to get immigration reform passed this year. “Independent economists say immigration reform will grow our economy and shrink our deficits by almost $1 trillion in the next two decades.”

One of the hottest issues over the last few months has been the Affordable Care Act (ACA), because of glitches with the rollout and in the website. and Obama took the time to address its naysayers on Tuesday night. He pointed out the positive outcomes that have resulted from the passage of the ACA such as the more than 3 million Americans under the age of 26 who are now covered under their parents’ plans.

All in all, some viewers saw President Obama’s address as an inspiring speech that aimed to renew the hardworking spirit of American citizens, as he looks to take executive action in hopes that the nation will follow his lead.