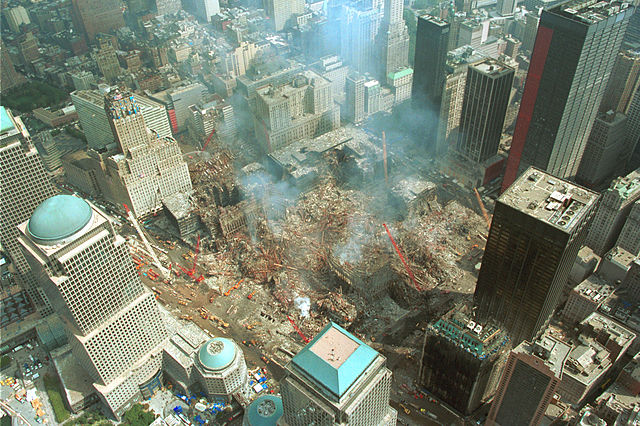 Memories, Myths and Moments of Silence

Smoke filled the air around New York City after two planes crashed into the Twin Towers at the World Trade Center. Firefighters, police and “heroes” pushed through the crowds trying to save other lives instead of their own. Civilians jumped from the world’s tallest buildings as they became engulfed in flames. Trauma-stricken people flooded the Brooklyn Bridge, walking away from Manhattan and regretting having left the comfort of their homes that morning.

The United States would change after Sept. 11, 2001. Airport security would increase, discrimination of Muslims would occur and a worldwide fear would continue to linger. Still no one could fathom why such an attack took place or what to think during that hectic moment.

“I didn’t really understand what was going on,” recalled New Yorker Kelcie Little, a second-grader at the time. “I was in school and remembered them sending us home early. We were watching the news prior, and I couldn’t help but be scared because my mom and brother both worked in the city.”

“It increased my fear in the world,” the 20-year-old said. “Now I walk around thinking, ‘What if?’ I don’t want to be caught in that position.”

Shniece Archer, 19, from Brooklyn, NY., had a similar experience. “As a child in the first grade, I didn’t know what was happening,” Archer said. “I was scared and just wanted my parents. My only understanding was that something bad was happening. My school was on lockdown, my friends’ and I parents were picking us up to go home and the streets were crazy.”

Memories of 9/11 linger on around the world. The monuments, moments of silence every year during the times of the attack and the tributes to those who lost their lives are constant reminders. For some, the mourning has never ended. — Rhea Benn

The TVs that hung from the ceilings of every classroom normally played our morning announcements. Kids acting as anchors would tell us what was being served for lunch and whether it would rain via the handiwork of the 9-year-old cameraman. On that day, our uninterested faces became confused looking as we focused on images of heavy smoke in New York City and faces of fear at the Pentagon.

Homeroom teachers began revealing the terrible distress that they usually did a masterful job of covering up. We didn’t understand and neither did our educators, who shook their heads in disbelief. No one could understand how hundreds met their final destination, dying senselessly. Who is capable of such evil? That was the question left unanswered that we now mask with remorse then faith.

Quickly rushed out of classrooms to our emergency-stricken parents, forcing smiles on their faces, the day was over as soon as it started. A day to remember; a day to teach. — Galila Daniels

The Tragedy. The Aftermath. The Reconstruction.

As the normal routine of the day begins in the nation’s capital, From the Heart Christian School opens it doors and teachers wait for their students. Filled with excitement and anticipation, Renata Wilson enters the school ready for her third week of first grade. But at 9 a.m., everything changes.

Wilson hears the deafening screams of the teacher next door. Suddenly, the teacher rushes into the classroom with her cell phone in hand trying to find a good spot for reception. Frantically, she tries to contact with her husband who works in the Pentagon. After what seemed like an eternity, she speaks with her husband and finds out he is safe. The day was Sept. 11, 2001.

With the loss of more than 3,000 lives heavy on the nation’s heart, Americans banded together. But, that sense of unity has since vanished.

“I believe that 9/11 caused the nation to temporarily come together to show patriotism, but it has died down,” says Ta’naysha A. Smith, a junior at Howard University. “The only thing that still exists is the prejudice that many people still hold against Muslims and others of Islamic faith.”

Since 9/11, the media’s portrayal of Muslims has been vital in shaping the public’s perception of Islam. “I believe that terrorism has made the public extraordinarily ignorant and prejudiced toward the Muslim community,” says Alana Jones, a junior at Howard. “The Islamic terrorists were extremists and therefore not representative of all Muslims.”

While the world can’t forget the tragedies of 2001, some people say it’s also important a nation founded on the principles of acceptance and freedom to be  united. They remind Americans to be conscious of profiling individuals because of the color of their skin, ethnic background or religious preferences. — Alexis Carter

“O’er the land of the free and the home of the brave.”

Imagine being randomly spotted and taken to a back room of an airport for a thorough search while running 15 minutes late for a flight. And it isn’t unusual for an entire line of travelers to wait impatiently as the security crew removes a bag with a restricted object from the conveyor belt.

The terrorist attacks of 9/11 have changed the United States tremendously regarding national and personal security. Airports have beefed up security, making it harder for terrorists to get weapons onto planes. Random spot checks, pat-downs, baggage checks and full body scans have become more prevalent in daily trips to the airport

Although many Americans view flying as a hassle, they have accepted the changes in security, because of the events that took place 13 years ago.

“I feel bad about the people that died, and it helped me realize the U.S. isn’t as untouchable as I’d once thought,” explained Mawira Nyamente, 23, business management major at Howard University.  “I always thought I was safe until I saw the second plane crash on live television.”

Nyamente, a Washington native, was 10 years old when the attacks took place. He vividly remembers seeing the explosions and bodies flying off buildings. He will never forget the sense of panic in his teacher’s eyes as she dismissed his class early.

“Everyone was shaken up because the plane hit in our home, and at the time violence in the U.S. was unheard of,” he said.

Even in the South, people felt the wrath of the terrorists’ actions. Hundreds of miles way, Jasmine Robinson’s elementary school in Atlanta was also dismissed early because of the breach in American security.

“I still remember the images that the news instilled in my head at 9,” said Robinson, now 21 years old and an accounting major at Howard University. “I would have never thought this would happen to us.”

“Looking back,” she said, “I feel like America picked on other countries and they finally responded.”

Although Americans may share Robinson’s view, they came together and stood unified during a state of emergency. American pride overpowered any differences. Background, race and socioeconomic status didn’t matter at that moment. Everyone pitched in to help fellow fallen Americans. 9/11 may have destroyed buildings, but it reinforced American pride amid a crisis. — Khaji Dennis