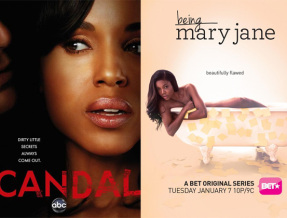 Are They Being Too Scandalous?

Olivia Pope and Mary Jane Paul are stirring up controversy among TV viewers, because of their undercover sexual relationships with married men — one of the men being the president of the United States. Some viewers of “Scandal” and “Being Mary Jane” are concerned how both characters depict black women in today’s society.

Kerry Washington plays the role of Olivia Pope, a well-respected crisis management expert in the ABC series “Scandal.” Gabrielle Union is known as Mary Jane Paul, a successful news anchor, in the BET series “Being Mary Jane.” However, the debate is not centered on their esteemed careers, but instead focuses on their promiscuous actions as black women in the public eye.

“It bothers me that instead of the focus being placed on the women’s accomplishments and respected careers, emphasis are placed on their unbecoming ways,” said Jasmine Jones, a student at University of Michigan. “Television needs to start highlighting the high pinnacles that black women reach.”

Robin Givhan discussed the controversial issue of a black woman’s image on television in a widely circulated Washington Post article. Over time, television has grown to be a dominant source of distributing and receiving information as well as serving as a prime form of entertainment. TV is said to be one of the most influential forms of popular culture.

With the widespread and prominent impact that popular culture has on society, the televised image of African-American women today is one-dimensional, Givhan said. “Television, in particular, speaks to viewers intimately, in the privacy of their homes, building long-term relationships and weaving complicated narratives,” she explained.

Some fear that because of television’s influence, girls in later generations will grow up with a tarnished image of women, leaving men with false ideas of the qualities of a real black woman.

“Honestly, I feel that Olivia Pope and Mary Jane’s characters glamourize what the world knows today as a side chick,” said Jones, who supports Givhan’s views. “It is rare that an African-American female holds such a prominent position in the media and when finally granted the opportunity it is tainted by bad character.”

“Scandal” marks the first time since “Get Christie Love” in the 1970s that an African-American woman has had the lead in a network television drama.

Conversely, some viewers say that people are taking the TV series too seriously.

“I don’t believe it is that serious; it is just a TV show,” said Mykale Trotter, a student at Pennsylvania State University. “It only becomes an issue when females try to look to these stars as role models; that’s not what their role is.”

Trotter went on to mention that both Washington and Union are respected outside their characters and that viewers must remember that they are just playing a role.

Bishetta Merritt, Ph.D., associate professor and interim chair of the Department of Media, Journalism and Film at Howard University, also discussed the impact of the shows.

“Aside from the fact that I am a devoted ‘Scandal’ fan, I don’t think these shows are a negative depiction of African-American women,” Merritt said. “I think they are very confident, educated and motivated. Both characters have weaknesses; their weaknesses just happen to be men. You can’t help who you love.”

Nevertheless, millions of viewers anxiously await the continuation of “Being Mary Jane” and “Scandal,” eager to see what additional drama and scandals are unveiled.