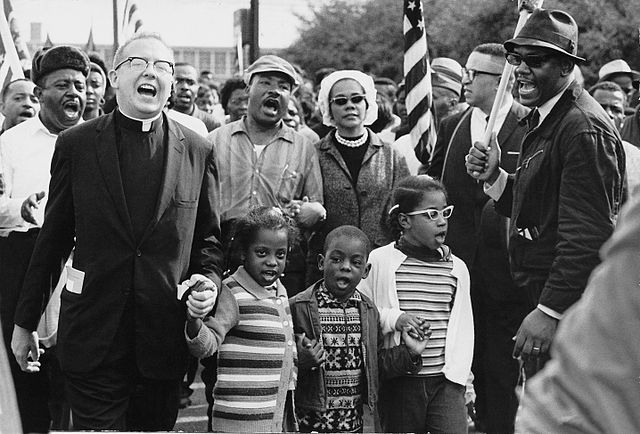 Contributor
4 min read
Music, singing and chanting have played an important role in shaping the black social consciousness over the years. Throughout history, African Americans have used music as a platform to celebrate  identity and entice  conversation about their oppression. Hymns have helped mobilize and inspire African Americans, even in times when inspiration and the spread of knowledge and ideas seemed impossible.

Songs played a particularly important role in giving a voice to the Civil Rights Movement. The Rev. Dr. Martin Luther King Jr. summed up its vital role clearly in a 1962 speech.

‘‘The freedom songs are playing a strong and vital role in our struggle,” King said. “They give the people new courage and a sense of unity. I think they keep alive a faith, a radiant hope in the future —  particularly in our most trying hours.’’

Below are five songs that played a significant role in shaping black social consciousness throughout the Civil Rights Movement. These songs continue to inspire and uplift today.

Originally a traditional Christmas tune chronicling the birth of Jesus Christ, this hymn was popularized by Civil Rights leader Fannie Lou Hamer in 1963.The song in this context was transformed to be a hymn that was grounded in remembrance of the children of Israel’s plight from slavery to freedom, or the “Promised Land,” led by their prophet, Moses. Activists drew a parallel to strengthen the black community with the idea that “we shall overcome.” The song is still covered and celebrated in both its original light and in the context of the Civil Rights Movement today.

2. “Lift Every Voice and Sing”

This Civil Rights anthem was originally a poem written by activist James Weldon Johnson to be performed by 500 school-aged children to celebrate President Lincoln’s birthday in 1900. Shortly after the song was set to music, the NAACP adopted the tune as its anthem and helped it become promoted as the “National Negro Anthem.” The song discusses remembering bitter past struggles while still having hope for the future. Though popularized in 1900, “Lift Every Voice and Sing” was written in a time when lynching and discrimination were normal, ideas that are reflected and expressed in Johnson’s writing. The anthem continues to march on as the sound of the Civil Rights Movement, providing a sense of triumph for all who hear it.

“Strange Fruit,” a tune popularized by jazz singer Billie Holiday, brought to light the significance of the gruesome effects of racism and lynching on the African-American community. The song helped to shape the black political and social conscious of that time. “Strange Fruit” was originally a poem written by Abel Meeropl, after he observed instances of lynching. “Strange Fruit” has remained a staple African-American tune since it was popularized by Holiday in 1939. Her version inspired many covers, books and awards.

Often called the key anthem of the Civil Rights Movement, “We Shall Overcome” became a theme song for the times after Guy Carawan taught the song to the Student Nonviolent Coordinating Committee in 1960. For many, the song has become more than just a song; it has become a way of life. “We shall overcome” is often viewed as the idea that despite racial struggles, African Americans will prevail. King and President Lyndon B. Johnson used the expression as a nod to the movement. The song continues to inspire and march on as the tune for many modern movements.

Maya Cade writes about social issues for 101Magazine.net. She is also Life & Style editor at The Hilltop, the campus newspaper at Howard University.