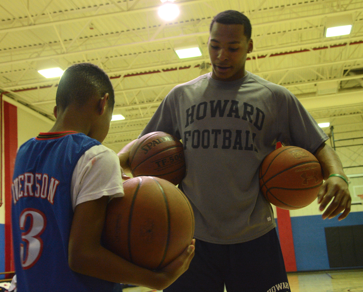 Bison Become a Force in the Community

Located blocks away from Howard University’s campus resides the Rita Bright Family and Youth Center. Since the end of the 2013 football season, Howard Bison Greg McGhee and John Smith have been at the 14th street community center faithfully, volunteering as coaches of a 10-and-Under boys’ basketball team.

McGhee, the starting quarterback for the Howard University football program, is the head coach and is partnered with his left tackle John Smith, who serves as the assistant coach.

“When I heard about the opportunity, without thinking twice, I knew it was the right thing to do,” said McGhee. “I’m helping other people, and I think that’s the most important thing in life.”

The community center, which is in association with D.C. Department of Parks and Recreation and Latin American Youth Center, serves between 150-200 kids a day and provides eight different basketball teams for five age groups.

“For the last few years, it’s been a hassle getting somebody reliable to coach the amount of teams we have,” said Abdul Hill, the center’s athletic director. “When I brought in Greg and John, the kids were really excited. They’ve been very reliable and I couldn’t ask for anything better.”

Hill, who is the son of Howard’s sports information director Edward Hill, expressed that the center consists of 96 percent African-American children and teens that come from different backgrounds, and witnessing student-athletes from the collegiate level volunteer enhances the atmosphere significantly.

“Some kids have single parents, some might come foster cares, and some are cared by their grandmother,” Hill said. “Seeing somebody that’s in college, a student-athlete scholar and playing football has been a big inspiration to the kids.”

Before the basketball season started, the kids would attend the Howard football games on Saturdays in support of their soon-to-be coaches. The 10-year-olds practice in the evenings twice a week and now make their game day appearance on Saturdays at various recreational centers across Washington, D.C.

Each center is a gateway for the youth to remain productive in a fun and safe environment instead of roaming the city’s streets. With the presence of McGhee and Smith,  the African-American based youth center is continuing to help shape the lives of the children through a range of positive activities.

“We try to be somebody that’s there for them. We want to have fun but we want to help them build structure at the same time,” Smith said.

Both McGhee and Smith played basketball in high school as their knowledge of the game is extensive enough to help develop the young—and perhaps, future collegiate athletes—in the sport.

“I started playing basketball when I was 10, so it means something to me seeing them play and helping them develop,” Smith said.

In McGhee’s basketball days, he helped lead his team to a deep playoff run in the 2011 Pennsylvania Boys State Basketball Playoffs, but he was never fortunate enough to receive the experience his 10-and-Under team is currently witnessing.

“As a kid, I never had anyone to look up to athletic wise and say to myself ‘I want to be like him’,” McGhee said. “You get excited seeing someone that’s doing what you’re doing on a higher level.”

The two three-year Bison have plans of continuing their volunteer efforts until they graduate, while also encouraging other student-athletes to contribute. Whether it’s on or off the court, McGhee and Smith are leaving an impact that is unmatched.

“Some people depend on you to make their day, and you have to come with the same energy every day to keep them happy,” McGhee continued. “It’s a great thing, and [John and I] are blessed to be in this position we’re in now.”

Rapper DMX Dies One Week After Heart Attack at Age 50

Written by: Tanyia Foster Taylor Thibodaux | 101 Magazine Happy Easter from Justin Bieber. The singer-songwriter is back again, with a surprise release of his gospel centered EP, Freedom, on Easter Sunday. Bieber...