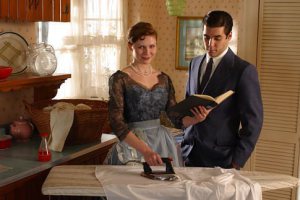 The Evolution of Marriage

A snow day off from school left me with extra time. Of course I didn’t spend it studying, which would have been the smart thing to do. Instead, I sat up in my bed, laptop in tow, glued to Netflix.

I had finished Gossip Girl, my latest series binge, so I browsed aimlessly through movies until I came across one: Mona Lisa Smile. Though I have never been wowed by Julia Roberts, the movie caught my eye. Before I knew it, I was enthralled by Roberts’ teaching efforts at the esteemed, all women’s Wellesley College, circa 1954, as Miss Katherine Watson.

Being the ambitious, self-proclaimed feminist that I am, I found myself furious at Kirsten Dunst’s character, “Betty,” whose life goal was to be a housewife despite her uncanny intelligence. I watched in amazement of how much emphasis was placed on becoming housewives. Julia Stiles’ character, “Joan,” turned down her acceptance to Yale Law School in exchange for eloping over a weekend and moving to Philadelphia, where her husband was to attend graduate school.

I had to continually remind myself that this was 1954 to avoid yelling at my MacBook’s screen in fury. Who, in her right mind, works as hard as humanly possible for her entire life, just to throw it away to fold towels and cook pot roasts?  I work way too hard to throw my education away for a man.

Now let’s face it: The women in this movie were all white, and it was set in a time when less than 30 percent of the black women in the United States were enrolled in college. If we fast forward to today, women of all ethnicities outnumber men pursuing undergraduate degrees. At Howard University, 67 percent of students are female. According to the American Enterprise Institute’s public policy blog, 140 women graduated with a college degree for every 100 men in 2013.

It’s safe to safe that the number of “Bettys” and “Joans” of the world has decreased –- significantly. Though women are still making less than their male cohorts, we take up a segment amount of the workforce.

By 2012, only 25 percent of white women by age 30 were unmarried. And black women? African-American psychologist Linda Young points out that in 2009, a startling 70 percent were single.

Dating and relationship coach J.J. Smith says that one reason so many Black women are single is because we spend our best years pursuing education and career goals. She says that a less-educated woman is more likely to stroke a man’s ego and less likely to emasculate him.

If that is the case, I guess I should get a boatload of cats now, because a man will never come before my educational and professional goals.

Why are we as black women expected to short-change ourselves to get a man? This is a question that needs answers.