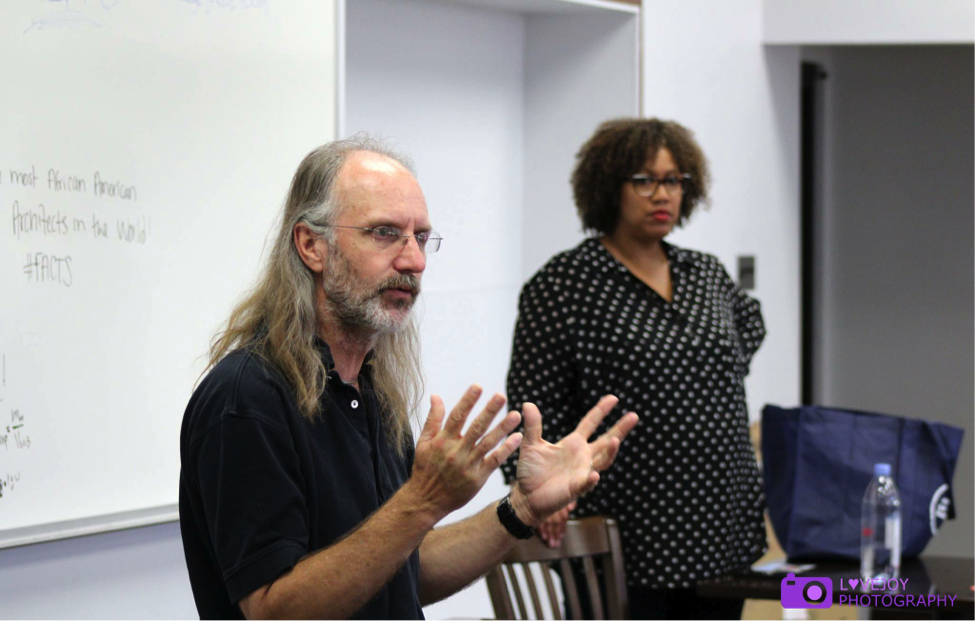 Playing to Win by Failing and Getting It Right

Eager students stand around the man behind Madden football and countless other games, reaching to shake his hand and introduce themselves. The man, Richard Hilleman, smiles from his chair as he shares small talk and anecdotes with them.

Engineering students and gaming enthusiasts quickly fill the small room to hear Hilleman, the chief creative officer at EA Games, impart his insight on a number of game concepts created by their peers at Howard University.

The event begins with a video titled “Fail Faster.” Created by the YouTube channel Extra Credits, the video discusses the process of game creation and innovation as a labor of testing and exposing ideas. The main message of the video is that “failing is how we get it right,” showing students that their dream games could come to life and prosper if they accept hard truths about their work and take the initiative to improve.

Shortly after the video, Hilleman sits at a table in front of the audience while a student, Victor Foreman, takes the podium to pitch his game idea. Eight students, primarily engineering students, present ideas ranging from single-player puzzles to multi-player mobile games.

Hilleman asks questions specific to each game idea, while raising three key questions for the young innovators to consider:

What kind of team would they need to complete this project?

What other resources would they require at this stage?

How would the game make profit and be commercialized?

Hilleman rates the pitches based on their answers, game ideas and overall presentations. Then, students in the audience vote to decide which of the pitches they would want to work on for a group project.

So why did an influential EA representative decide to visit the HBCU for this event?

So what kind of generational change did Hilleman find in Howard University based on the pitches?

“What’s interesting to me is that if you do a conversation like this five years ago, the conversation is all about Triple A console games and very expensive PC games,” he says. “What was interesting today was, almost all of the references that you saw … were small independent products or mobile games — none of them from the mainstream.”

“The smaller independent self-published, self-created games are much more influential than the big blockbuster games for this audience,” Hilleman points out, “and that’s a change.”

Although the room was filled with engineers, people of all backgrounds and skills can be successful in the gaming industry and help to fill the void for producers, designers and, to a lesser extent, game engineers.

“If I took all of the designer and producer graduates from programs in America next year, it would be about 100 people,” Hilleman estimates. “I have 6,000 people who make games. … If only 1,000 of those are producers and I lose 10 percent a year — because that’s kind of normal — that means I gotta hire everybody that gets out of school? Uh, that’s not gonna happen!”

“We look in unusual places,” Hilleman explains. “We look in English programs. We look at the gambling schools in Las Vegas.”

“We look at hotel/hospitality schools on the East Coast. We look at other entertainment schools like acting and theater and film for people who can understand how to produce products and make them for others,” he continues. “We have more holes than supply, and that makes us invest in helping people get over the remaining gap between what they know and what’s useful in our business.”

At the end of the day, Hilleman says, “it’s about commitment more than anything else. A big chunk of the creative business is getting used to hearing the word ‘no’ and not dying every time you hear it.”

“Even if you’re right, even if you have the best idea in the world,” he advises, “you’re gonna fight through 7,000 ‘no’s to get to the finish line.”

Amylia Johnson writes about gaming, the Internet, social media and books for 101Magazine.net.