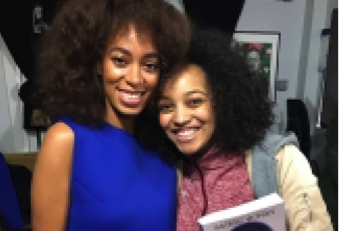 For some people, meeting their favorite celebrity can be an embarrassing experience. Sometimes the words do not come quickly enough, causing some to lose the opportunity to speak to their idols.

However, that was not the case for YouTube sensation Kiara Nelson, who admits she froze, got lightheaded and even cried when she met singer Solange Knowles at Sankofa Video, Books & Café on the edge of the Howard University campus. Fortunately for Nelson, she regained her composure long enough to hug Solange and “embrace the moment.”

“Then, I introduced myself, “and told her how much she’d helped me with her music,” Nelson says. “Then, I asked her to say my outro.”

“Hi, this is Solange here and thanks for spending time with Ki,” Solange says with a giggle as Nelson records her. “Spending Time With Ki” happens to be the name of Nelson’s YouTube channel, which has more than 100,000 views.

Solange was not just at Sankofa for discourse and pictures, though; apparently she also had a mission. The artist, who had performed at the Peace Ball during inauguration weekend, encouraged each attendee stay motivated and to follow his or her dreams. She also bought 250 books from the store to hand out to everyone who came.

“My friend and I were talking about ordering them, and then we saw them at Sankofa,” Nelson said. “We were about to buy them not knowing she was giving them away.”

“It holds significance to me because I have a lot of self-healing to accomplish, and I’m hoping the book can assist me.”