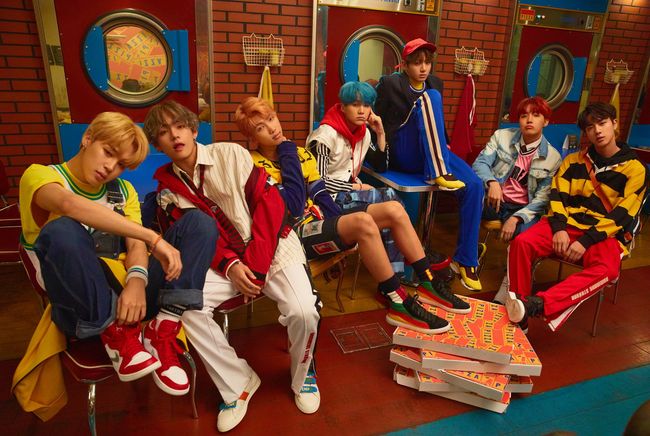 BTS LOVE YOURSELF: HER. HOT? OR NOT?

Those are only a few of the descriptors used to refer to the K-Pop group, BTS, composed of members RM, Jin, Jimin, Suga, J-Hope, V and Jungkook. The seven-member group launched into international fame last year after the release of their album, Wings, whose subsequent U.S. tour sold out five shows. The release of their new mini-album, Love Yourself: Her, propelled their songs to the top of the charts in 73 different countries on iTunes. Here’s a breakdown of what all the hype is about.

Intro: Serendipity: The intro song of the album sung solely by Jimin, the for now, blond haired, brown-eyed heartbreaker of the group leaves the listener wanting more than the 2:31 seconds of song given. It is a soft and sweet ballad underlined by a subtle beat that when Jimin croons, “Love me now. Touch me now,” leaves little resistance in the listener to comply. One of the best songs on the album, the songs vocals and lyrics are more risqué than the normally innocent love songs sung by the group. However, Jimin’s angelic vocals, matched by his angelic appearance in the video, provide the perfect opening for the album and the only solo sung song.

DNA: The title track of the album, the song is reminiscent of many post 2010 era pop songs. From the upbeat, synthesized chorus and acoustic guitar riffs to the whistled melody which opens the song, it gives off the vibe of trying to be a summer jam and falling somewhere in the land in between pop jam and a club mix. Despite its somewhat confusing vibes, the song is still just good enough to bob your head to with its enthusiastic vocals from the group. Though you want more of it as a title song, it still gives you just enough.

Best of Me:  Unfortunately, the highly anticipated collaboration with the Chainsmokers wasn’t the song of the album as many had hoped. With a characteristic Chainsmokers beat that just doesn’t impress like you want it to, even the vocals of BTS couldn’t save the track. It leaves you feeling like if that’s what they were going to come up with together, they might as well have left the collaboration alone. Or worked on it a little longer.

dimple:  This fourth song on the album is a decent showcase of the style BTS has established on the album so far. It’s beautiful melodies, synthesized sounds and chill beats creates a simple song that you can sit back and listen to appreciatively. Jin, Jimin, V and Jungkook’s display of their individual vocal styles complement the track nicely.

Pied Piper: Pied Piper is the first deviation from the stereotypical love song on the album and it’s a hit. The song’s beat, melodies and rap lines sink in, making you want to dance to the laid-back groove as they sing. Just from the title of the song, as the Pied Piper lures children away with his music, BTS shows they are conscious of how each song will affect their audience.

Skit: Billboard Music Awards Speech: The track is an excerpt of their acceptance speech from this year’s BBMA. It is also acknowledgement of their groundbreaking BBMA win and proof that even at the time of receiving award, they were working toward this next album as RM finished his speech telling their fans, named the Army, to love themselves.

MIC Drop: This song is perhaps one of the most refreshing deviations from the so-far chill sounds of the album. It’s characteristic of the rap line to put an intense beat in the album, check out BTS Cypher Pt.4, so this song was a welcome addition to group. It gives the rap line, RM, Suga and J-Hope their chance to show off, which is exactly what they do. Each line is purposefully and artfully delivered over the beat. The rap line continues to prove that with and without a beat behind their vocals, they each bring unique lyrics and lines to the group.

Go Go: This track is another nod toward popular music. This song channels popular hip-hop songs in the U.S. like “Mask Off” that have a new formula composed of a flute melody and a Caribbean beat. The beat and Caribbean feel drags the track into the laid-back vibe the album started with despite the hype lines and ad libs delivered by Suga, RM and J-Hope. Unfortunately, the overall track, which likely was meant to be hype, isn’t as hype as they had hoped.

Outro: Her: The final track on this album is a slightly underwhelming ending to an otherwise solid album. The rap line throws you back into a 90s style hip-hop beat, something they’ve done since their album 2 Cool 4 Skool. They deliver their lines relaxed and without some of the intensity characteristic of the rappers. It could be purposeful, to end the album as they opened it. However, it seems more abrupt than anything else. An okay song out of context, it just didn’t seem like a worthy ending for the album.

No one can deny that BTS is climbing rapidly in popularity and success. The attention they’ve received from the media, celebrities and fans alike since their BBMA win has guaranteed that. Releasing an album now, while people are still interested was the most advantageous thing to do for them, but were they ready? There is also a hidden track, Sea, produced by RM, which is only available on the physical album. Overall, the album is solid and true to BTS. It explores new sounds while still infusing old ones. It doesn’t disappoint but it also isn’t an album to ‘Wow’ the fans. Rather, it seemed to say, ‘We’re still here. Hang on for now. We’ve got better things coming.’

You can check out the album, Love Yourself: Her, on Spotify, iTunes or your local K-Pop store.