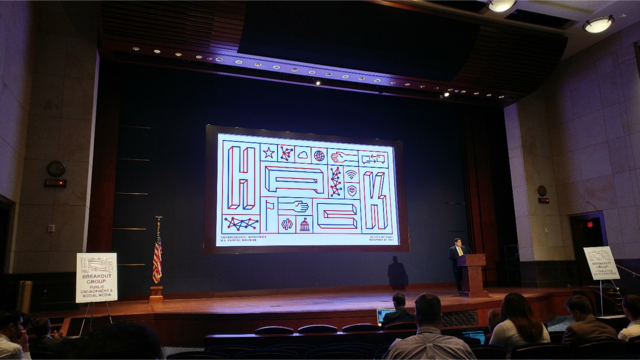 In Hack We Trust: Congressional Hackathon Bridges People and Congress Through Technology

“You know the business of being called hackers is not that great,” Hoyer joked as he took the stage, “But it is a skill, an asset to have. What transpires here has the potential to transform Congress, and therefore the country, and to some degree our democracy, for many years to come.”

The one-day event was held in the Congressional Auditorium of the United States Capitol Visitor Center. The event lasted for four hours, during which time programmers, developers, government employees and activists gathered to pitch and decide on ideas to help foster transparency between Americans and Congress through technology, as well as using technology to improve Congress overall.

The scheduling of the Hackathon coincides with the expected signing of the Modernizing Government Technology Act this week and the ongoing fight for net neutrality online.

Of the approximate 100 attendees of the Hackathon, 12 presenters came to the stage one at a time at the behest of Stephen Dwyer, senior adviser to Hoyer and an organizer of the Hackathon, to pitch the program they had been working on. Pitches ranged from programs which make it quicker and easier for people to access archived legislature online, or keep track of Congressional Research Service reports, to an app which organizes governmental tours in the D.C. area more efficiently. As noted by Hoyer and McCarthy, this Hackathon had the largest turnout since its creation in 2011.

“It took many years and it took lots of work from people within the Library of Congress and people within the GPO,” Dwyer said regarding the event. “This was a big project that resulted from conversations from communities such as this.”

The presenters and other attendees split into five ‘breakout’ groups following the end of the final pitch, corresponding with each other on topics such as legislative data and process, public engagement and social media, casework and constituent services, modern hearings, markups and press conferences, and “moonshot,” a subtle jab at Congress’s pace when it comes to passing legislature.

“The simple solution everywhere is a moonshot for Congress,” Seamus Kraft, executive director and co-founder of the OpenGov Foundation, said, “every single thing folks are talking about in the moonshot group are problems Congress can solve, has to solve, and to see the level of member engagement here.”

The OpenGov Foundation is a non-profit organization created by Kraft and Rep. Darrell Issa back in June 2012. The organization’s mission is, similarly to the mission of the Hackathon and other organizations represented, to foster transparency between everyday Americans and Congress, processing civic data and keeping track of legislation passed by Congress in a way that is most efficient, quick, and accessible.

While Kraft had no qualms about calling the pace at which Congress worked “glacial,” Kraft commended both Hoyer and McCarthy as outliers. He commended them not only for helping to organize and to host the Hackathon, but for their admission of ignorance—for admitting to not knowing the solutions to problems between Americans and Congress and that they, as part of an older generation, won’t understand the innovation of the “grain of government”: college students well-versed in technology.

“They’re watching the frameworks that they used successfully in their careers to solve problems in Congress, in the ‘90s and 2000s that worked, that are no longer working.”

The hackathon was bipartisan in nature, considering not only the collaboration between Hoyer and McCarthy, but the diverse viewpoints welcomed by each group and presented to the other attendees in a final pitch before the event’s end.

“It’s important that we take a step when the partisan back-and-forth find ways like this Hackathon to come together to engage the public in a positive way,” Hoyer said. “The more the people know, the better our democracy will be.”