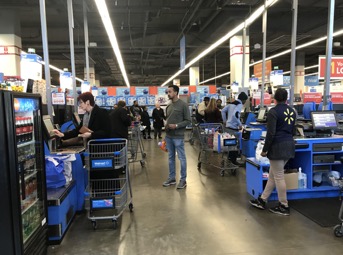 No Job? Blame the Robots

The local Walmart is no longer the average neighborhood retail store. When customers are ready to make purchases, they are now greeted by a self-servicekiosk instead of a cashier. In particular Walmart locations, shoppers who wish to only pick up their items are instructed to use what Walmart calls the “Pickup Tower.” This procedure replaces the usual process where you go to the back of the store and wait for an employee to get your pickup items.

Walmart’s Pickup Towers, which are generally located in the front of the store, are approximately 16 feet tall and 8 feet wide. Once customers scan the barcode on their receipt, the machine’s door opens and their pickup items emerge in less than a minute. Similarly, Walmart is testing a grocery dispensing machine at an Oklahoma location. Walmart isn’t the only example of how companies are using automation technology within their stores.

Retail companies across the country are installing advanced robotics within their local stores. These new technological advances prove to be more efficient for the customer experience; however, the new technology may impact jobs for the employees of the stores.

“Automation may affect some occupations negatively,” Teri Morisi, branch chief of the Division of Occupational Employment at theBureau of Labor Statistics, said. “Some occupations may be less in demand while others will be more in demand because the occupation is directly involved with automation.” For example, “The need for industrial engineers will increase. But, the need for an office clerk will likely decrease because of software. The software allows more work to be done quicker.”

According to a report by the Cornerstone Capital Group, about 6 million to 7.5 million retail jobs will become obsolete due to automation advances. The World Economic Forum predicts that 30 percent to 50percent of retail jobs are at risk. As a result, a great number of those in the retail workforce are at risk of becoming “a stranded worker.”

Experts also suggest that the exchange of human workers for robotics may be due to the need for fewer workplace necessities. Employers are held responsible for providing their employees with good working conditions.

“People always want a raise, good working conditions or respect,” Dr. Emily Blank, who specializes in labor economics and microeconomics, said. “A computer doesn’t demand those things. It’s difficult to create a robot that is compassionate or creative; yet, there are a lot of mundane tasks that computers can take over.”

Those who will be affected most by the shift in the retail workforce are women and middle-aged adults. As reported byData USA, women make up about 51.6percentof the retail industry and the average age of retail workers is 37.7. The cashier is the retail position that will be most replaced by automation, which impacts women the hardest because theymake up73percent of cashiers. In addition, those with a lower skill set will face more job hardships compared to those with a higher skill set.

Yet, automated checkout lines replacing cashiers isn’t the only challenge of advanced robotics in retail. Companies are creating robots that will also change how inventory and stock is completed.

For instance, Simbe Robotics created Tally, the world’s first fully autonomous shelf auditing and analytics solution. This robot will able to perform difficult tasks such as auditing mispriced, sold-out and low stock items during regular store operation hours. Consequently, there may be job losses for stock positions in the retail industry as well.

This major shift within the retail industry stems from the increase in consumers shopping online. Also, there is national concern surrounding wage inequality. Hence, major retail stores like Kmart, JCPenney, Macy’s and Payless have closed several locations. To survive in this climate, a retail store must be highly efficient and profitable, but that is now a challenge due to the increasede-commercecompetition.

Amazon, a company with almost 22 years of e-commerce experience, has optimized its automated and robotic systems to remain both efficient and profitable. According to CNN Tech, an Amazon employee spends about a minute picking up items from the shelf, boxing and shipping each order, while the robots do the remaining tasks.

The adoption of advanced technology by companies has raised their productivity to fulfill increasing demand and economic growth. As a result, the boost in robotics and automation throughout the retail industry is profitable, though there is still concern for the future of its workers.

However, experts assert that workers should not be concerned because the new developments in automation creates new jobs.

“We believe the growth of robotics and automation develops jobs,” Bob Doyle,vice presidentof the Robotic Industries Association, said. “It helps companies compete in the global market that all companies compete in. It allows them to make higher quality products. It is also faster and innovative.”

“A lot of people believe robotics will get rid of jobs, but it does the opposite,” Paul Purda, a programmer at Automation Experts Inc., said. “Automation is going to create jobs and eliminate repetitive jobs. Many workers’ compensation complaints are from repetitive jobs that cause injuries like strain. A robot can only do stuff that is repetitive.”

“Technology can destroy jobs, but it also creates jobs,” William Spriggs, Ph.D., who specializes in labor economics, said. “For example, in auto factories, no human paints cars anymore. This was one of the more dangerous jobs in auto factories. Now someone controls a machine that paints the car. Automation makes some jobs safer.”

Workers may feel that robotics and automation are their biggest competitors in the labor force.  However, there are always major shifts in technology. The transformations of technology have shaped the world for hundreds of years. For example, the Industrial Revolution was a major turning point in technological innovations. That era provided society with improvements in technology that shifted the environment from rural agriculture to a factory-like city. The Industrial Revolution removed a great deal of jobs, yet provided hundreds of new ones.

“Robots have been in factories for a very long time,” Spriggs said. “We already lived through it. If we need to know how we are going to be more productive in the future, then we must look at the past. Also, the productivity of now compared to 1950 has changed tremendously. For example, it used to take 60percent of the American workforce to provide food; now it takes 2 percent.”

Similarly, those who are experts in the robotics and automation industry believe new technologies will advance society and provide better employment opportunities.

“When a company is more successful, they hire more people,” Doyle said. “The jobs that are being created are even better jobs. Jobs have been evolving since the Industrial Revolution. But, robots don’t take jobs at all.”

In contrast, some experts believe that there haven’t been any shifts in our society, although technology is continuously advancing.

“With all the advancements in technology as a society, we haven’t economically moved,” Spriggs said “They are suggesting productivity will be so high that we will need very few people to be a part of the process. In economics, that means the wages of those few people must be high. If we are allocating workers in an optical fashion, then the dollar value amount of the last thing they made should be how much they make. Here’s the problem in their vision. They don’t mention a lot of high wages, because they are going to unemploy a lot of people.”

Additionally, automation and robotics specialists assert that robots will work in collaboration with human workers. Although, the new advanced technologies are autonomous, they will still need human operators.

“All robots have to be programmed,” Doyle said “They need maintenance. There are many opportunities for people. Robots can also work side by side with humans.”

For example, Purda mentioned before Automation Experts automated the Chobani yogurt factory in New York, there were only six workers. Yet the factory is now fully automated with about 2,000 employees. Equivalently, Morisi acknowledges that some industries like health care will have autonomous technology, but that they will still need humans to be hands-on.

The future of robotization doesn’t quite mean that retail stores or factories will function solely with advanced robotics. With the proper skills and specialized classes, those who felt displaced by new technology developments can prepare for newer and better roles.

“With training, people can become robotics technicians,” Doyle said. “They could work in front of computers and analysis data. There are a lot of job opportunities. The biggest problem that all companies face is finding people for the jobs they have open. The problem is filling the gap that exist today.”

Nonetheless, the addition of automation into any industry will cause a spike in productivity. When productivity increases, then a surplus of goods will be produced. In order for society to function economically, those with low and high skill sets must be paid higher wages. If wages aren’t increased all around, then an excess of products will be produced with very few people able to purchase them.

“Walter Reuther, the former head of the United Automobile Workers, describes this when he went through the Ford plant and watched them bring in the robots,” Spriggs said. “And people said to him, I bet you are upset because robots don’t pay union dues. But, he says no I’m upset because these robots aren’t going to buy cars. Robots don’t buy products, people do. The purpose of a robot is to produce or provide services for humans. But, people need income to demand it.”

However, society still faces challenges with how capital is allocated among all, which is why poverty continues to exist in certain communities. If employees at every skill set are paid more, then there will be more opportunity of purchasing goods.

“The logic of what tech experts are saying fails what economists call the general equilibrium issue,” Spriggs said. “You aren’t going to pay workers high wages, but robots will produce all this stuff. So, who is buying it? And if no one is buying it, why do we need robots?”

Regardless, all industries have a robotic counterpart and may face sectoral shifts. Industries like social media are advancing autonomously, too. Miquela Sousa is “fashion’s first computer-generated influencer.” Her Instagram handle @lilmiquelahas a following of 962,000. With her social platform, Sousa shares stylish shots wearing big fashion brands, and spreads her support for social causes like Black Lives Matter. Similarly, Sophia,a robot from Hanson Robotics, has been featured across all media; and Shuduis the first digital supermodel who looks like a dark-skinned black woman.

“I believe the robotics industry is bright,” Doyle said. “It’s being introduced into industries where they weren’t utilized as much in the past.”