Your Break Between Classes
FacebookTwitterEmailLinkedIn 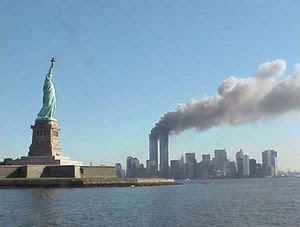 9/11: A Day Some Americans Will Never Forget

Contributor
9 min read
When many people think back to a moment where they knew exactly where they were and what they were doing, they gravitate toward 9/11 — a day that America will never forget.

Sept. 11, 2001, started off as a normal day for people from all walks of life. By 8:46 a.m., a hijacked plane hit the North Tower at the World Trade Center and then a second at the South Tower about 15 minutes later. Within a half-hour, a third plane struck the Pentagon just outside Washington, and a fourth crashed in Shanksville, Pa.

The coordinated terrorist attacks left more than 3,000 dead — not only those on the planes, but also public servants and civilian bystanders. Scores of others have spent nearly two trying to heal physical and psychological wounds.

The attacks are seared into the nation’s collective memory, especially for those over the age of 25 who remember 9/11 like it was yesterday and have pledged to never forget.

As the United States commemorates the 18th anniversary of 9/11, some of them share their experiences through these vignettes.

As a member of the Crisis Action Team for the U.S. Army, Major Tyree Webster and his comrades had received news of the Twin Towers being hit. Moments later, he became a firsthand witness of American Airlines flight 77 crashing into the Pentagon.

From his vantage point at a bus stop allowing clear sight, he saw “fireballs going up” from the thunderous crash. Amid the ensuing chaos, a car blew up in front of the State Department.

Without access to the Emergency Operations Center, Webster helped to execute a response and send an Army Reserve official to represent the Crisis Action Team. He was honored for his courage and participation in relief efforts.

A Giant Ball of Fire

One of Michael Perry’s close relatives was working in the Pentagon when the plane flew into the building. She described hearing an explosion from her cubicle. When she got up to investigate the commotion, a giant ball of fire headed toward her and she immediately started running to escape.

After surviving this terrifying event, she began to watch Westerns and old films to avoid non-stop coverage of the attacks. She still watches Westerns to this day.

Perry also said that she was triggered by the earthquakes that shook the D.C. area in 2013, because it reminded her of the 9/11 attacks.

A New Way of Life

Brandon McManus, a 30-year-old D.C. native, said that he was in health class at Virginia High School when the intercom suddenly cut on to inform the students of the attacks. Since the location of the school was relatively close to the Pentagon, the students were ordered to gather in the auditorium until their parents came to pick them up. Many of the students’ parents were caught up in the chaos, according to McManus.

“A friend of mine, his dad was a police officer at the time, and he got the call to go down there. But luckily we [saw] him when he came home,” McManus said. “One of the girls that was in my school at the time, her father was a firefighter. She actually lost her father that day.”

Mohamed Osman, 33, of Virginia was affected by the public’s response after the catastrophe.

“It made it hard for me, as a person named Mohamed,” Osman said. “Whenever we traveled, we’re always randomly checked.”

A Sense of Community on Campus

Kristen Williams, a 2005 alumna of Howard University, thinks about 9/11 all the time. She recounted the day in vivid detail.

“I woke up to get ready for a 9:40 a.m. class, and I was watching ‘Good Morning America,’” Williams said. “As I watched, I saw the second plane hit on live TV. It didn’t register to me that we were under attack. I thought it was just an incident in New York.”

Williams caught the shuttle from the Meridian dormitory on 16th Street to the main campus. By the time she arrived, a plane had struck the Pentagon.

“Nobody was really in class; everyone was on the yard,” Williams said. “By that point, you could see the black smoke from the Pentagon.”

A native of Flint, Michigan, Williams began looking for familiar faces in the crowd and saw her  hometown friend, Pilin. “We ran to each other. We didn’t know if they were coming to campus next; we just wanted to go home.”

Panic arose because calls weren’t going in or out. “Nobody could call me for hours, and I couldn’t call them. The lines were so busy; I couldn’t reach anyone till later that day.”

Afterward, Howard grieved along with the rest of the country.

“I went to class either the next day or the following day, and the teacher never showed up,” Williams said. “We went back on Friday. Someone from the department met us and told us the professor wouldn’t be back as his wife had died in the attack at the Pentagon. He took the rest of the semester off, and I don’t know whatever happened to him.”

Eighteen years after that day, the weight of the tragedy is still with her. “I think about that day all the time,” Williams said. “I can remember my emotions and what was going on in my mind exactly.”

Yet she says everyone came together that day, sharing cell phones if they worked, crying on each other’s shoulders and calming down people who were nervous as they all stood on the yard.

“There was a real sense of community that day.”

Yakeem Jones, 44, was stationed at an Air Force base in Dover, Delaware, when the first plane hit. Everyone thought it was an accident. Once the second plane hit, they knew it was an attack.

“Everyone went completely quiet; no one said anything for a good two minutes,” Jones said. “We could not believe what we were watching.”

As a service member, he had to stay at work until the next day at 7 p.m. The event was so traumatic that no one was actually working, Jones recalled. Their eyes were glued to the TV.

“We knew nothing would be the same after this,” he said. “It felt like it was the end of the world.”

While Jones was stuck on work, Lee Drummond, 48, couldn’t get back on his Air Force base in Montgomery, Alabama, after leaving to pick up supplies for the office. When he returned, the base was locked down. Nobody could get on a military base anywhere.

At first, Drummond was confused and had no idea why the base was shut down. He could not get any information about what happened through his job. So he heard about the attacks when he went home. He tried to call a relative who lived in New York, but there was no cell phone service.

Drummond believes that it is important to keep this day alive to remember everyone who lost their lives. He also said that 9/11 scared everyone to death and that the American people are still traumatized by the events that transpired.

Clifford Patterson was working at a post office in Queens when 9/11 took place. He was concerned about two of his four children who attended school in Lower Manhattan.

“By the grace of God, they were home or at least near to where the attack wouldn’t harm them,” Patterson said. “Overall, it was unfortunate for those who encountered the attack and the Towers. However, I’m blessed my family was safe and sound.”

When Patterson heard about the incidents, he wanted to confirm that it was actually terrorism through official or news sources. “I’m not really word-of-mouth individual,” he said. “I personally like to hear or see for myself to make up my own mindset.”

“Being concerned for the city and family is not a feeling anyone would want to experience,” he added. “With all the other terrorists attacks in the world, sometimes those feelings are brought back and it disappoints me every time of the world we live in.”

For 25 year old Willis Marsh, 9/11 was a mysterious and quiet day. He was in second grade during the terrorist attacks and remembers being picked up early from school.

Just 7 years old at the time, he didn’t grasp his mother’s attempts to explain why he had to head home and stay there after only a half-day of classes. At the other extreme, his father arrived home from work really late, because of traffic.

“I don’t think I fully understood what happened,” said Marsh, who lived uptown in Manhattan far from the World Trade Center.

Although he grew up in “the city that never sleeps,” no one was outside.

Kent Thomas, D.C. native and studio production manager, spent a lot of time on the roof on 9/11.

“I was supposed to be off that day, but they called all of us in because something happened in New York.”

Thomas had been assigned to cover for the rooftop production manager as journalists got live shots overlooking the White House or the smoke from the Pentagon.

“My first live shot was with CBS Bob Schieffer on the phone with Dan Rather,” he said. “I could see the Pentagon burning from our rooftop location.”

Thomas remembers the plethora of journalists who came to get live shots from the various rooftop vantage points. “We had eight locations,” Thomas said. “Once one journalist finished, another would jump in. It was super busy the whole day.”

While walking from one location to another, Thomas saw chaos that continues to stick with him.

“I was walking across K street, everyone was coming out of the buildings and everybody stopped all of a sudden because their schedule was thrown off,” Thomas recalled. “They didn’t even know if the buses that took them home were still running.

“People didn’t know whether they should go home, go to their kid’s school to get them or what exactly they should do. I could see the confusion on their faces. They had no idea what was going on. They just knew D.C. was being cleared out.

“Seeing the streets completely cleared is something that sticks out in my mind as well.”