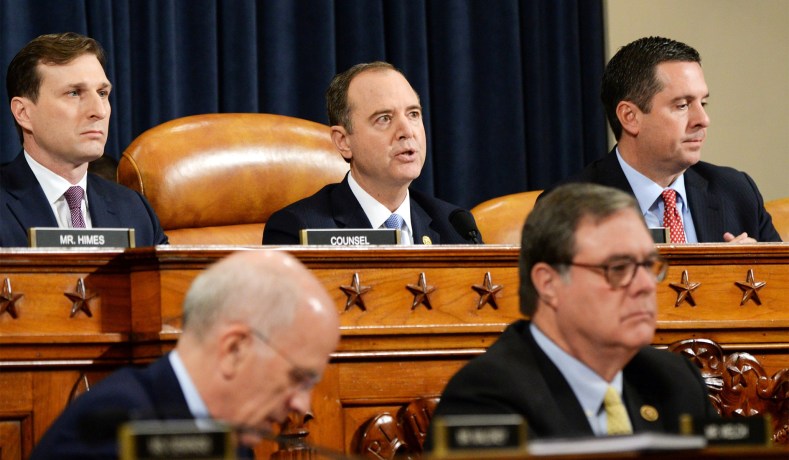 On Monday, The House Judiciary Committee revealed a list of academic scholars who will testify and analyze the constitutional grounds for President Donald Trump’s potential impeachment.

Democrats will call on the testimonies of Noah Feldman, Pamala Karlan and Michael Gerhardt, law professors at Harvard, Stanford and the University of North Carolina, respectively.

On the other side, Republicans will employ Jonathon Turley, a law professor at George Washington University, as their witness.

Democrats will be arguing that Trump committed impeachable offenses by attempting to pressure Ukrainian officials to investigate potential presidential revival Joe Biden, and his son Hunter, by withholding military aid. Republicans, on the other hand, will be holding onto their convictions that there is no evidence of “bribery, extortion, or any high crime or misdemeanor,” according to a 110-page report released by House Republicans on Tuesday.

The White House will reportedly not attend the Judiciary Committee’s first impeachment hearing, as the president will be in London for a meeting with fellow NATO leaders. Trump used this as an opportunity to slam Democrats for the poor timing of the meeting, debasing the process as a “hoax,” according to Politico.

Heading to Europe to represent our Country and fight hard for the American People while the Do Nothing Democrats purposely scheduled an Impeachment Hoax hearing on the same date as NATO. Not nice! pic.twitter.com/LCXYhoOWF6

This impeachment investigation stemmed from a whistleblower complaint that alleged President Trump pressured Volodymyr Zelensky to investigate his political rivals.

The House has compiled evidence from both closed door and public testimonies of over a dozen witnesses. However, many sought-after witnesses have refused to comply, and Democrats have decided not to use the court’s subpoena power to pressure these witnesses. Instead, Democrats will use these refusals to argue that these would be instances of obstructions of Congress, which would be a possible article of impeachment.

“We saw how witnesses who were expected to side with or defend Trump ended up hurting him by telling the truth about the situation,” Ferdinand said. “The misconduct is as clear as day; now it is just a matter of time before the investigations and hearings end and the House impeaches him.”

William Ince, a freshman Afro-American studies major from New Jersey, disagrees with Ferdinand, and he believes that the inquiry will not result in an impeachment.

“It’ll hopefully bring more evidence to the table but won’t likely result in his actual impeachment,” Ince said. “I do believe there are constitutional grounds from impeachment, such as contacting Ukraine to get dirty on party members.”

Senior political science major Kevin Chisolm II believes that Republicans are trying to stall the Democrats’ momentum in the inquiry.

“I believe [Republicans] know what he did and are aware of the obstruction, but they’re trying to use the ‘not enough’ evidence case to stop the Democrats momentum,” Chisolm said. “Pushing the ‘political hoax’ story is misleading.”

With over a month worth’s of testimonies, here’s an overview of takeaways from witnesses who provided evidence in the impeachment inquiry:

Sondland, the U.S. ambassador to the European Union, stated that there was without a doubt a “clear quid pro quo” between Trump and Ukraine officials. Sondland explained that he, along with other officials, worked with the president’s personal lawyer, Rudy Giuliani, “at the express direction of the President of the United States” to secure an investigation of Biden in exchange for a White House visit.

“We did not want to work with Mr. Giuliani. Simply put, we were playing the hand we were dealt,” Sondland testified. “We followed the president’s orders.”

Yovanovitch testified on her ouster, stating that she felt “threatened” by the Trump administration and that her removal was based on false claims. A target of Giuliani’s smear campaigns, she denies protecting American diplomats in Ukraine by giving Ukrainian officials a “do not prosecute” list.

Volker was able to provide text messages sent between Trump’s envoys and Ukrainian officials, leveraging Zelensky’s long-coveted visit to the White House with a request to open investigations into the president’s political rivals. However, Volker stated that he didn’t know the investigations focused in on the Bidens.

David Hale, Under Secretary of State for Political Affairs

Hale told impeachment investigators during his closed- door testimony that he was never aware of investigations into Burisma, the Ukrainian natural gas company, the Bidens or the 2016 election. However, he was able to provide new details about the confirmation of Secretary of State Mike Pompeo and the ouster of Yovanovitch, the former ambassador to Ukraine who was at the center of Giuliani’s smear campaign.

During her public testimony, Cooper provided that Ukrainian officials have been aware that security aid from the United States had been taken away as early as July 25, the same day as the infamous phone call in which Trump pressed Ukraine’s president to investigate his political rivals.

As President Trump’s former top adviser on Russian and European affairs, Dr. Hill told House investigators that John R. Bolton, the administration’s former national security advisor, refused to be part of Trump’s alleged plan to leverage money for a political favor from Ukraine. She quotes Bolton as saying,” I am not part of whatever drug deal Sondland and Mulvaney are cooking up.” She has also undermined the “fictional narrative” that Ukraine meddled in the 2016 election in favor of Hillary Clinton, which has been pushed by the Trump administration, according to the New York Times.

Holmes was reportedly in on many conversations between American and Ukraine officials, and was often expected to take notes of their conversations. However, Holmes was able to provide information about an unusual call taken place between Trump and Sondland, the U.S. ambassador to the European Union, and recalled Trump asking Sondland if Zelensky planned to “do the investigation.”

Morrison testified that he knew of the leverage being held against Ukraine through Sondland. He has also stated that he believes that the July 25 phone call between Zelensky and Trump was not improper or illegal, but was concerned by the political implications of the call.

Williams listened on in the infamous July 25 call between President Trump and Ukraine President Zelensky, and described the call as “unusual,” since “it involved discussion of what appeared to be a domestic political matter.”

Vindman revealed to investigators that the transcript of the July 25 call between Trump and Zelensky various omissions, and that he had tried and failed to fill in key details. These omissions, according to Vindman, would include Trump’s assertion that recordings existed of Biden discussing Ukraine corruption, and a mention from Zelensky about Burisma Holdings.

Providing a closed-door testimony, Sandy testified to investigators about signing a legal document that froze aid to Ukraine for months. This move, according to Sandy, was approved by Congress.

Kent testified against the White House’s wishes. He told investigators that Trump wanted Zelensky to publicly announce he’d be investigating Democrats and that he wanted the Ukrainian president to use the words “Biden” and “Clinton.” However, Kent clarified that he did not hear this from Trump himself and that he heard this from people who had talked to Trump.

Taylor testified that he spoke to several high-level officials over the course of several months, regarding the president’s involvement with Ukraine, and that there was a coordinated effort to force the country into a “quid pro quo.”

“I was in the regular channel” of diplomacy,” Taylor testified, “but I was also in the irregular one.”

Croft, an adviser on the National Security Council, said that Robert Livingston, a lobbyist, told her that Yovanovitch should be fired.

Reeker told investigators that he pressed State Department leaders to defend Yovanovitch as she faced a smear campaign from Giuliani.

McKinley detailed the reason for his resignation, stating that he was frustrated about the Trump administration wrestling Ukraine policy away from career diplomats. He warned that pressuring Ukraine “to procure negative information on political opponents” would “have a serious impact on foreign service morale and the integrity of our work overseas.”

In his testimony, Maguire defended the actions of the whistleblower, as well as his own actions handling the case.