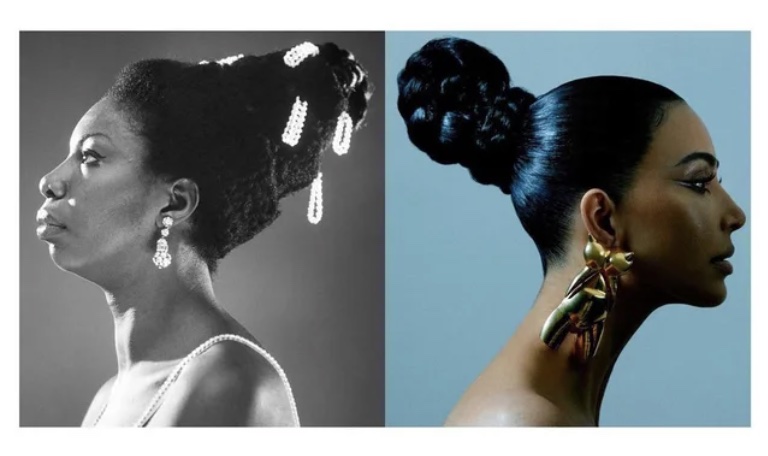 As the most recent cover girl, Kim Kardashian sat down with Vogue’s Jen Wang to discuss her life as a “mogul-mom.” Though the feature article mostly detailed her experience with motherhood, marriage, and running multiple businesses, the photos used for Kim’s cover far overshadowed the story’s contents.

Kim’s photoshoot for Vogue’s March 2022 issue slated her as a trending topic for something that the mega-celebrity has long been made familiar with — “blackfishing.” Coined by culture journalist Wanna Thompson, blackfishing is a subcategory of cultural appropriation, defined as “white women ‘cosplaying’ as Black women on social media.” With”extensive lip fillers, dark tans and attempts to manipulate their hair texture” cited as a few forms of evidence of this phenomenon, the ladies of the Kardashian clan have all come under fire for varying degrees of this offense.

The photoshoot associated with the Vogue feature depicts Kim in several hairstyles and poses likened to Black cultural icons like Beyonce, Nina Simone, and Naomi Campbell.

Not only have individuals identified the imagery of Black women that seems to inspire this photoshoot — search engine algorithms have done the same.  Alternatively, some have displayed confusion for equating Kim’s deeper makeup shade and posing to her “channe[ing] her inner black woman.” Comedian KevOnStage states in his response video to commentary on the cover that “bronzer ain’t Black.” Based on Kim’s ongoing comments about her blackfishing and cultural appropriation accusations, it’s possible that she feels the same way. Whether this is due to a lack of deeper cultural awareness or “an act of self-preservation,” as Wang puts it in the Vogue article. “She doesn’t devote much energy to analyzing her effect, for better or for worse, on the culture,” the article deduces.

A part of the issue taken with women accused of blackfishing or cultural appropriation is the failure to pay homage or acknowledge the origins of their style of hair or dress, or in this case, the creative direction of a photoshoot.

In the article, women who have artificially adopted the tanned skin, long dark hair, and curvy figure that Kim Kardashian dons are referred to as “Kimitators” and “symbol[s] of the mogul-mom’s impact on the culture.” Major players in the fashion industry share similar sentiments. “I think for many, many years, there hasn’t been anyone who has redefined the standards of beauty, of feminine beauty, as much as Kim has,” Balenciaga’s creative director Demna tells Vogue.” She redefined our understanding of what beauty is.” Occurrences like this are not new to Kim or the media in general. Mainstream trends are often just a repackaging of age-old Black cultural staples, and we’ve seen evidence of this as far back as the popularization of rock music and as recently as the resurgence of Y2K-inspired looks in fashion. But the release of this cover during Black History Month begs the question: was this an oversight due to a possibly lacking diversity on the team involved with this Vogue feature, or was this a conscious choice for clicks?