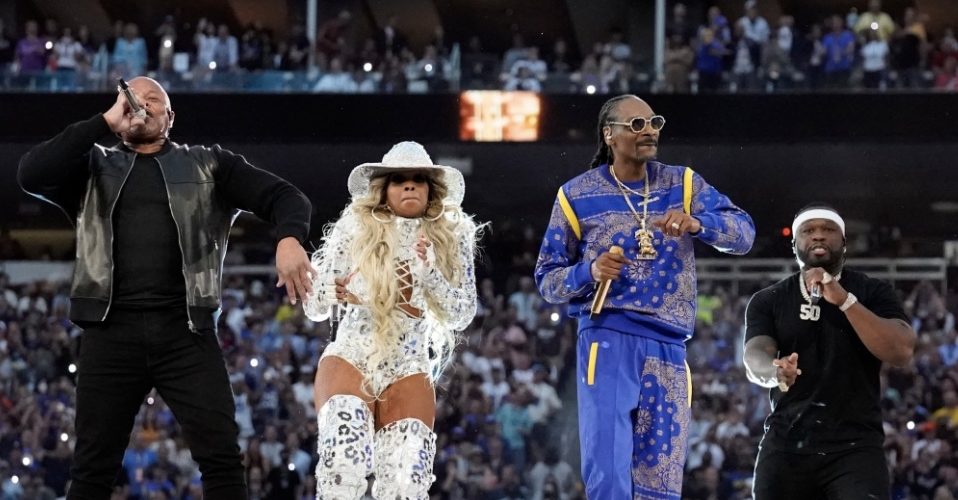 On Feb. 13, 2022, I had the opportunity to witness the Cincinnati Bengals, led by quarterback Joe Burrow, take on the L.A. Rams in Super Bowl LVI at SoFi Stadium on an 82-degree day in Los Angeles, California.

But if that wasn’t enough, I was able to experience the pre-game work on the days leading up to the game – which as an aspiring sports journalist was almost as thrilling as the clincher touchdown that sealed the Rams win.

On Thursday and Friday, my mentor Anthony Smith allowed me to sit in while the Entertainment Partnerships & Cause Initiatives worked on sets. During my first full day on set, I watched the creation of the Super Bowl Pepsi Halftime Interview, with musical artists Dr. Dre, Mary J. Blige, Snoop Dogg, and BigBoy. I watched as the production crew set up chairs, tables, and audio and camera equipment in less than 20 minutes. From there, I listened to BigBoy conduct the actual interview.

Once that interview was completed, we traveled to a second location to prepare for the Generations shoots taking place on the following day. The NFL Generations shoot features a current NFL star and an NFL legend and they sit down and watch a film together. Being that this shoot is a lot more intimate, the production crew took a long time preparing and setting the scene for the shoot. We worked with various lighting combinations, furniture, and camera positions which took about three hours. Once we received the final approval from my mentor, we had a hard stop at about 7 p.m.

The next day we had a 10:30 a.m. call time. Since we prepped the set the night before, we just did a few run-throughs to prepare for the segment with Minnesota Vikings running back Dalvin Cook and former running back for the Seattle Seahawks Edgerrin James. Once the two arrived, the shoot lasted about 30 minutes.

From there, we all went on break before the segment with Seahawks quarterback Russell Wilson and former San Francisco 49ers quarterback Joe Montana. The two of them arrived and their shoot took about 45 minutes. Once that shoot ended, my weekend began.

On Saturday, I went sightseeing in the city because I wanted to have a calmer day before game day. Once Sunday rolled around I spent my entire day preparing for the game. Around noon, I got dressed and headed to the shuttle to the stadium. Once I got there I was able to get through security fairly quickly and then I stopped by some of the fan pre-game parties. By kick-off time, everyone was in their seats for the start of the game.

The Rams were off to a hot start but the Bengals quickly put the game back into reach. The first half flew by and the Pepsi Halftime Show started. Dr. Dre, Snoop Dogg, Mary J. Blige, Kendrick Lamar, Eminem, and 50 Cent all put on a great show. Every fan received a lanyard that lit up during the halftime performance.

The second half featured a lot of thrill and the fans were really excited and into the game. The Rams ended up winning in stunning fashion to claim their second franchise Super Bowl victory. I’m happy I was able to witness this once-in-a-lifetime experience in person.