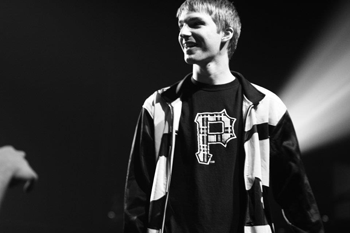 Who Is The Skeleton at the Feast?

When a self-proclaimed “scrawny, white boy” says he’s a rapper, he probably expects some judgement and a bit of shock. In Levi “The Skeleton at the Feast” Gordon’s case, most don’t put away preconceived notions until live performances.  When Gordon isn’t performing, he is a student at Belmont University where he’s a junior audio engineering major and a creative writing minor.

Robert Gross : Why “Skeleton at the Feast”?

Skeleton at The Feast: My grandmother had a book about different phrases and weird sayings.  It stuck with me because the original meaning of the phrase is based on what the Egyptian monarchs used to do at feast and celebrations.  You would have everybody eating, drinking, and having a great time and the monarchs would wheel out a skeleton in the middle of the feast.  It would be someone that all knew, maybe they were friends with, or maybe someone who accomplished a lot of things in their life and had been eating around that same table.  Now they have passed away and all they were was bones.

RG: How was it growing up in Wilkinsburg, PA? Did it influence you at all?

SATF: It was a weird balance because I am a scrawny, white boy growing up in a predominately African-American community and half my life I went to a private, Christian school.  I found myself stuck between two cultures.  I never felt like I completely fit into either one. For me, I learned a lot of thing from both cultures. I also think I can see the problems within both. I feel like growing up gave me a lot of interesting and unique insight coming out of there.  It really gave me a passion for social justices.  It also made me concerned for what our youth are growing up with and the examples we are giving them.

RG: What inspires you to write?

SATF: Probably the easiest answer are things that upset me cause me to write.  I don’t have to many happy songs and I think that’s mostly because like poetry, Good rap music has a platform to say what you want to say and people will listen.  Maybe because they want to dance or they want to be enlightened, but they will listen.  So when I see something in society that upsets me, or I’m just going through a hard time in my life and I want to get it out, I write.

RG: How will you incorporate your education into your rap career?

SATF:  I feel like they’re so many rappers who aren’t interested in education.  I actually had an internship in my neighborhood this past summer working with neighborhood kids and one thing that became really obvious is our latest generation is not concerned with going to school and getting an education because what we teach them in our culture is that you don’t need that to be successful.  They think “I don’t need to work for money, because I can get the money from drug dealing,” or “I don’t need to get a nice car from working because I can steal it.”  Or the measure of a man is how much social power he has in his neighborhood and not how educated he is.  I want to be on of the rappers who has something to say because I’m educated.  Also, having a degree in junior audio engineering allows me to work with other artists who may not know me for my rap, but they just want to lay down a song that I can help them with.  Pretty soon we can form a relationship and make more music together.  It’s a good opportunity with new contacts.

RG: Where do you see yourself musically in the future?

SATF: I think just working with as many artists as possible and getting my music out there as much as possible.  Honestly, I would like to be able to sustain my music, and myself but it is so hard with the climate of the music industry right now.  I don’t expect that it will happen for me, but I do want to see that in the future.  I want to be able to put all my labor and my heart an mind into the music without having to take a second job over it.

SATF: That’s a good question. I don’t consider myself in it. I have a lot of respect for it. I think it gets a bad rep because people just see those two terms together and the idea of rap music being materialistic so there is a contradiction, but I think the absence of profanity allows Christian rappers to be more creative. As an artist, the reason why I don’t put myself in that genre is because it is not my goal to play in churches. I see my calling is reaching people who are lost and I want to teach them and tell them about how my life got saved.  As someone who is educated and someone who has been given a lot of opportunities, I want to get out there and spread that message.  That is my primary goal, to reach people.  I don’t see myself reaching people as well in the kind of Christian rap genre.

RG: If you had to choose one song that listeners had to hear, what song would it be and why?

SATF: That’s a tough one. My heart says, If I was on my deathbed and I only got to play one last song for an audience, it would be “Escape” because those have the most personal lyrics.  It is about a certain point in my life that I was really hesitant to talk about.  Back in high school when I was depressed and God seemed so far away and I was just ready to die.  No way to sugar coat that really.  It’s about looking back with a more mature perspective and saying, “I thought I could never get over this.”  I was feeling so trapped and didn’t see a future beyond it. I don’t know why we have to go through trials, but I do know that we can learn a lot of things from them and allows us as humans to relate to other humans and makes us more compassionate about what we are all going through.  I think “Escape” would probably be the song.