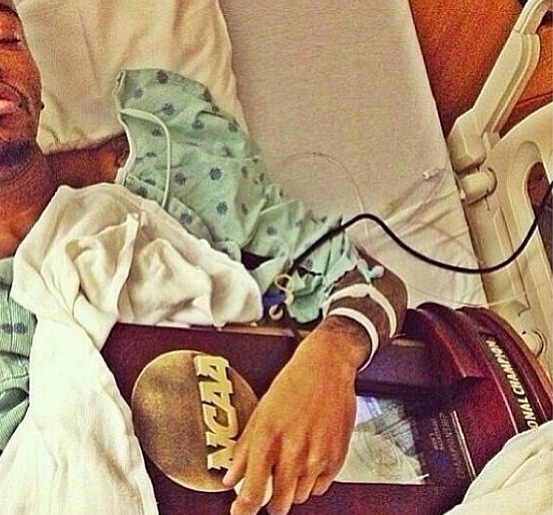 Social media went into a frenzy about the recent injury of Louisville Cardinals guard Kevin Ware during the first half of the Midwest Regional Final at the Lucas Oil Stadium in Indianapolis on Easter Sunday.

Ware laid flat on his back in front of the Louisville bench with a serious injury to his right leg immediately after challenging a 3-point jumper by Tyler Thornton of the Duke Blue Devils.

His right leg was clearly snapped in two places with his bone being exposed through the skin.

Upon realizing exactly what happened, the entire stadium hushed. Louisville players and coaches seated on the bench near Ware were in shock.

Many speculated if Kevin Ware had prior leg injuries because of the severity of the break.

In a post-game interview, Louisville’s coach, Rick Pitino, stated that Ware yelled to his teammates, “Win the game! Win the game!” before being rolled away to Methodist hospital in Indianapolis.

That is exactly what the Cardinals did. Louisville defeated Duke 85-63.

Social media has been buzzing ever since about Ware and his team.  A photo of the sophomore athlete clutching the Midwest regional final championship trophy while laying in his hospital has gone viral.

Sports journalist and commentator Skip Bayless took to Twitter to express his condolences to Ware.

“That’s one of the most sickening leg injuries I’ve ever had to watch,” he tweeted. Mind you, Skip Bayless has seen a lot of sports’ injuries during his time. “God bless Kevin Ware.”

Basketball fans from all over have also taken to Twitter to express their love and prayers for Ware through the use of “hashtags” #PrayForWare, #PrayersforKevinWare, #PrayersforWare and #WinForWare.

However, some have used this unlikely injury to exploit and poke fun at Ware by forming parody and fake Twitter accounts in Ware’s name. Two accounts, @KevinWare_ and @LifeAsKevinWare, have created the most controversy and confusion — thanking fans for their support.

Celebrities such as young hip-hop star Diggy Simmons, Damien Wilkins of the Philadelphia 76ers and even former Atlanta Braves player Chipper Jones have been fooled by these fake accounts.

Huge questions are circulating on Twitter about Ware’s return to Louisville basketball: When will he be back on the court? Can Ware help his team win this NCAA championship? The chances are highly unlikely. Pitino made a statement claiming the recovery of his sixth man off the bench is expected to take one year.

Ware has moving around on crutches after a successful operation to insert a rod in his right tibia, Kenny Klein, Louisville’s senior associate athletic director for media relations, said on Twitter.

Klein also said that Ware would be in Indianapolis until Tuesday and that Cardinal fans might be able to catch him cheering on his team in the upcoming semifinal game at the Georgia Dome in Atlanta.

With Louisville down a key player going into a major game, many are excited to see exactly what the Cardinals will do come Saturday against Wichita State.

The most recent plea via social media has been for everyone to wear red and white colors today to support and stand in unity for a speedy and healthy recovery for Kevin Ware.

Let the Madness of March continue…