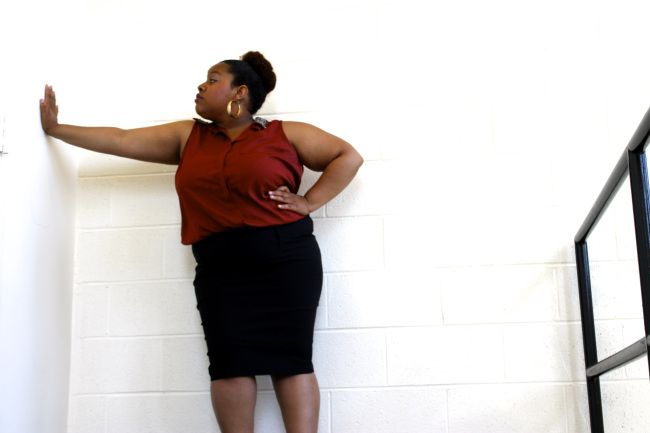 No Trendy Fashion for ‘Fat Girls’

Butter Obama’s philosophy is that “a size is a size.” That’s what he tells women who ask about plus-size clothing. “It’s your size, not plus size,” said Obama, the founder of CasuaLuxury, a clothing company in Philadelphia that provides ready-to-wear and custom clothing.

With summer fast approaching, it’s inevitable that women will wear less clothing and show more skin. But what about the plus-size women of the world? Should they stay covered because they do not have a “perfect” body? Or should they just not care and wear the same clothing as “skinny” women?

Plus-size women have the hardest time buying clothing and wearing what is in style. But it’s not because they don’t like to shop or follow trends. It is simply because the clothing is not always available. And when it is readily available, it looks quite different than those in straight sizes.

“It’s not equivalent. The same clothes are not made for plus size as they are for regular-sized girls,” Obama said. “It is an issue. I don’t feel as though some designers are fair.”

Although some stores cater to larger ladies, there is still a lack of trendy, plus-size fashion.

As a 21-year-old and senior at Howard University, Tiara McKiver is not interested in wearing the same outfit as an older woman.

And on the few occasions when women find plus-size clothing that is similar to fashion for the standard-size woman, others often frown upon their choices.

For instance, many plus-size women are joining the popular but controversial “fatkini movement.” A “fatkini” is simply a two-piece bathing suit that shows more skin than a tankini, but not as much as a bikini. It pairs a high-waisted bottom with a top similar to those of regular bikinis.

Several users on Gojane.com have criticized the campaign by saying that “obesity is unhealthy” and that unhealthy weight should not be promoted and glorified.

However, Gabi Gregg, the blogger who is credited for starting the fatkini campaign, responded through media outlets that she is not “a poster girl for obesity or an unhealthy lifestyle.”

Gregg’s  following includes women like Alexis Bayard, an 18-year-old from New Castle, Dela., who plans to purchase and wear the fatkini.

“It’s a fashion statement for bigger girls, and it shows off my curves,” Bayard said. “Just because I’m bigger than some doesn’t mean I don’t look good.”

Stores that sell fatkinis include Forever 21, The Avenue, Torrid and Rue 107.

Still, some women won’t wear fatkinis for personal reasons. Ashley Weiss, a plus-size woman, will not be buying a fatkini anytime soon.

“I don’t think I’m that confident to wear one,” Weiss declared. She links her lack of confidence to societal messages that “we aren’t good enough, like smaller women.”

“A lot of people look down on plus-size [women],” she said.

A fashion blogger known as Vivi showcases her plus-size outfits. Her blog, Heart, Print and Style, averages about 7,000 views a month.

“I believe that some of the brands and designers think that the trends won’t look good on a plus-size lady,” Vivi said. “They are still in the mindset that any lady in a certain size shouldn’t wear horizontal stripes or skinny jeans or body-hugging material may highlight their ‘unwanted’ features.”

Vivi strongly disagrees with those who don’t connect fashion with plus size.

Ashley Dill, a sales associate and fashion marketing major at Laboratory Institute of Merchandisng (LIM) College in New York, says that if she were a fashion designer she would cater to both standard and plus-size women. “I would produce skirts that accentuate the curves of both figures.”

As someone who designs for women of all sizes, he believes that “fat girls” should have more options for trendy fashion or whatever they want.

“Fashion is a form of art, and no one artist is the same.”