The Unheard: Students at HBCUs Struggle to Find Plant Based Options 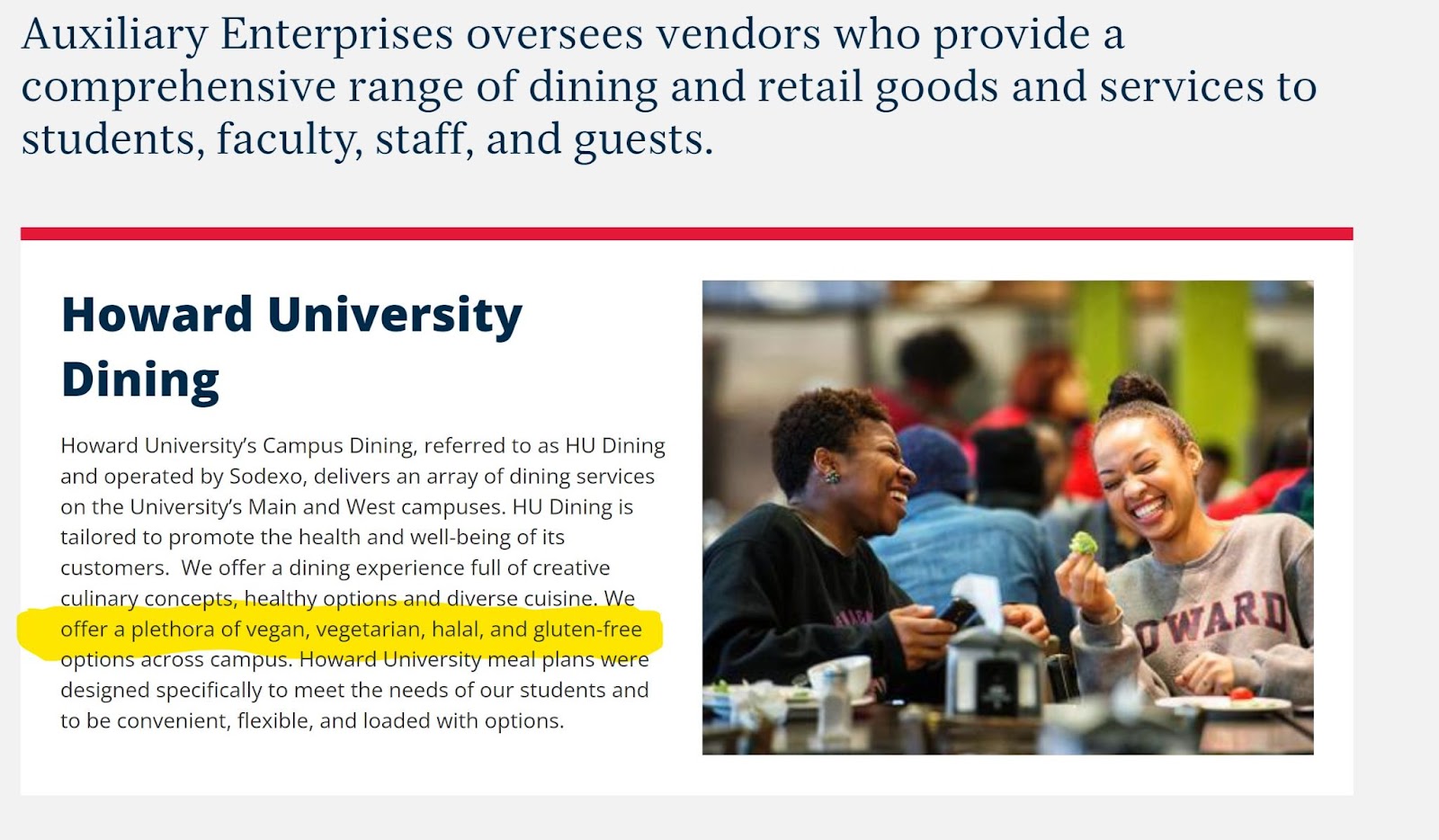 At Howard University, a historically black college located in Washington D.C, individuals are able to have unique experiences among the many cultural backgrounds represented by students and faculty on campus. This sharing of ideas and art is commonplace to HBCUs across the country as they pride themselves on showcasing the beauty of human creativity.

One of the best places students do this is the cafeteria, and on special days like “Catfish Fridays”, “Fried Chicken Wednesdays”, and as the Howard Bison call, “Soul Food Thursdays”, many of the most popular soul foods dominate the menus. RibsFoods like ribs, macaroni &and cheese, fried chicken and collard greens are among the most common items on these plates and remind many students of their homes and upbringings.

However, when these foods make up a majority of the options available to Howard students it often ostracizes a small sector of those who follow vegan, vegetarian or halal diets and whom also make up the, “…8% of African Americans [that] identify as vegan or vegetarian compared to just 3% of the general population,” according to PEW Research.

Kyle Veazie, a political science and psychology double major at Howard University, who has not eaten meat for nearly two years, talked about his journey so far at the university as a transitioning vegetarian.

“It was really difficult to adjust because a lot of the different food options, even though they were considered vegetarian, were not tasty food options. They were not things that you wanted to eat.” added Veazie.

“I feel like social media definitely caused a cultural shift to increase the number of people taking their diets seriously and being vegetarians and vegans but I still think that a large majority of the black community is cut off to these ideas because of the traditional meals that we are conditioned to….ribs, hog mogs, chitterlings…these are just things that are ingrained in our culture so it’s hard to shift away from that,” he continued.

Additionally, students that do not have the resources to grocery shop or eat food from restaurants must make adjustments to the way that they eat, and some are left with no choice than to eat what is provided. This inaccessibility to high quality fruits and vegetables alters the daily routines of individuals who, in many cases, have eaten that way their whole lives.

For Muslim students like Sabarin Ahmed, who is a legal communications major at Howard University, her eating halal meat not only represents her childhood, but also represents her faith.

“Even though I do not eat halal meat as often, because it is kind of hard to come by in certain places like DC for example, it still influences me to eat less meat just because that was such an ingrained part of my childhood,” said Ahmed as she discussed the roadblocks she faces in trying to find options on campus for a halal diet.

As students speak up about this issue, they still must do the best they can to eat within their dietary restrictions without disrupting their daily schedules. Some students like Aanisah Clark, who is a junior, political science major at Howard University, cooks her own vegan meals and does not mind the extra work of preparing the food because it makes her happy.

“Me, being from Brooklyn, I come from a big Rastafarian community, so we were all raised to be pretty strictly vegetarian. For us that was normal and we knew lots of other kids that grew up vegetarian as well,” added Clark.

The lifestyle that some students once knew as normal has become a challenge to maintain as students refute the university’s claims of offering a plethora of options for all plant-based diets.